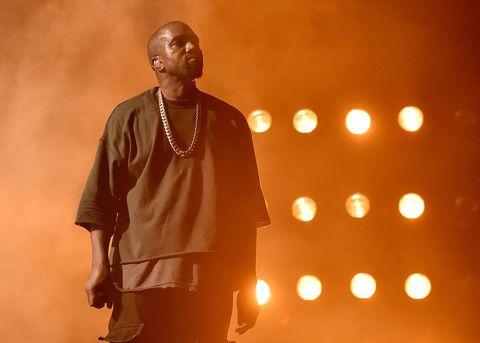 Kanye West, man who may or may not communicate with ghosts, just admitted that he had some help on his new album. The rapper recently described the still untitled masterpiece as a "dream that can't happen without God," and said that he only did a fraction of the work. The rest? Robert Kardashian, to be honest.

"I'm only doing two percent of the work," West told Real 92.3. "God is doing the rest of the work. My mom had Teddy Riley change his flight and come back to the studio. Robert Kardashian is making sure all the deals is getting done. He's still doing deals for controversial black people from up in heaven."

We feel so much better about life knowing that Kanye's communicating so closely with God's squad. And speaking of higher powers, Ye says his album (which will have listeners experiencing "ultra light beams") is heavy on the biblical references. "It's not exactly what happened in the Bible, but it's a story of this idea of Mary Magdalene becoming Mary," he explains.

Mehera Bonner Contributor Mehera Bonner is a news writer who focuses on celebrities and royals.
This content is created and maintained by a third party, and imported onto this page to help users provide their email addresses. You may be able to find more information about this and similar content at piano.io
Advertisement - Continue Reading Below
More From Celebrity
Lady Gaga Wears Athleisure and Platform Shoes
Meghan Markle Possibly Shared a Photo of Lilibet
Advertisement - Continue Reading Below
The Kardashians' Most Body-Confident Nude Shoots
What Happens on Katie's Season?
Britney Spears Says She Was Locked in a Bathroom
Kate and William Holiday In Cornwall
Blake Lively Wears a Pink Sequin Dress
Meghan Markle Hangs Out With Melissa McCarthy
Simone's Boyfriend Sent Her the Sweetest Message
Rebel Wilson Recreated This Britney Spears Look