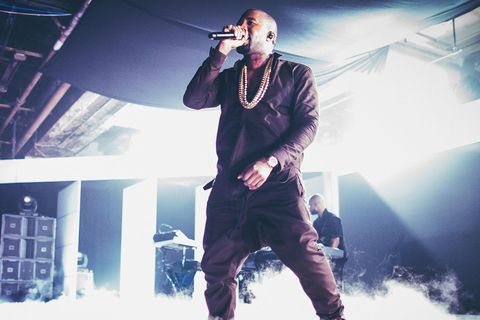 Remember when Kanye West promised a free pair of Yeezys to the person who could figure out the name of his new album? The rapper revealed via Twitter that the masterpiece formerly known as both Swish and Waves is going by T.L.O.P, which is apparently an acronym for The Life of Pablo.

The album title appears to be a reference to Pablo Picasso, a mere plebeian artist that totally wishes he were as brilliant as Mr. West.

'Ye made a reference to the painter during a speech at Oxford University Museum last March, saying: "My goal, if I was going to do art, fine art, would have been to become Picasso or greater. That always sounds so funny to people, comparing yourself to someone who has done so much, and that's a mentality that suppresses humanity."

So true, Kanye, so true. Also, in case you can't read his handwriting, here's the full track list from T.L.O.P, an album that probably has The Ghost of Picasso using a million emoji heart-eyes.

We expect the album to drop any moment now, so if you need to sign up for Tidal (yes, it's still a thing), now's the time to do so.

Mehera Bonner Contributor Mehera Bonner is a news writer who focuses on celebrities and royals—follow her on Instagram.
This content is created and maintained by a third party, and imported onto this page to help users provide their email addresses. You may be able to find more information about this and similar content at piano.io
Advertisement - Continue Reading Below
More From Celebrity
See a Rare Portrait of Princess Diana's Mother
Kelly Ripa's Husband Left Her a NSFW Comment
Advertisement - Continue Reading Below
Jennifer Lopez on Learning to Love Herself
Diana's Wedding Interview Footage Is Telling
The Queen May Honor Kate Later This Year
Olivia Wilde & Harry Styles Keep It Profesh on Set
Prince Harry on How Tabloid Attacks Changed Him
Watch Orlando and Katy After Her Performance
Kate Middleton Debuted Long, Straight Hair
Prince Harry's Surprise Inauguration Appearance