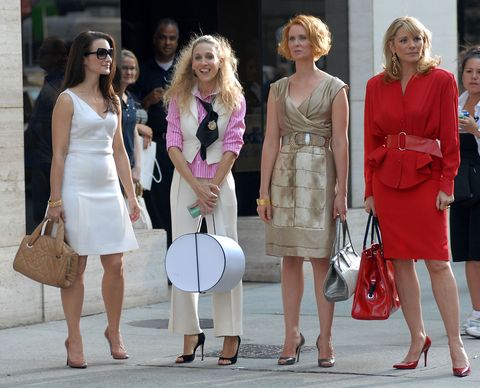 Typically, fan theories occupy a special place on the internet where only the brave amongst us go (hi, Reddit!). But in an exciting twist for the fan-theory community, Sarah Jessica Parker has delivered a Sex and the City theory so mind-blowing that we are questioning everything.

Guys: Carrie's best friends might be figments of her imagination. And, as we know, she has a super active imagination considering the running narrative in her head.

"I used to wonder if Samantha, Charlotte and Miranda were real," Jessica Parker tells Nerdist. "Because they're such perfectly archetypal characters. So you're writing a column about sexual politics and observations of female/male primarily, heterosexual relationships—so you're picking one type. You're saying 'this type is this and this,' and then you complicate it more, like any good writer does. So, I'm not entirely sure they are real."

Excuse us, we need a moment.

"She is among them because that's her way of infiltrating story and affecting story too," the actress continues, "to have her own actions affect those friendships and document their response."