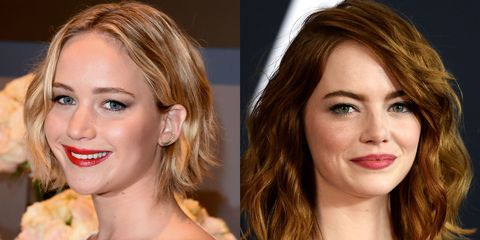 Emma Stone and Jennifer Lawrence are two of Hollywood's most talented stars, and they also happen to have a lot in common (namely a killer sense of self-deprecating humor and really good taste in sure-to-be-Oscar-nominated movies). The actresses are fast friends, but apparently there was an unspoken rivalry between them—at least according to Stone.

The La La Land actress spoke to Vanity Fair about her friendship with Lawrence, saying, "She may not even know this, but there was definitely a time early on when I was like 'Oh hey, my ego is going nuts, she's so great, and vibrant, and talented, I'm screwed, I'll never work again, goodbye yellow brick road. Then I chilled the f*ck out—and remembered we're completely different and there is room for everyone, even if it's an industry that doesn't really seem to support the idea up front."

Meanwhile, Lawrence says, "I don't know what I would be without acting. So if there is someone who loves the same thing, it should bring us closer. But it depends on how that person is, and Emma is so normal and lovely. If I wasn't her biggest fan, I would've Tonya Harding'd her in the kneecaps."