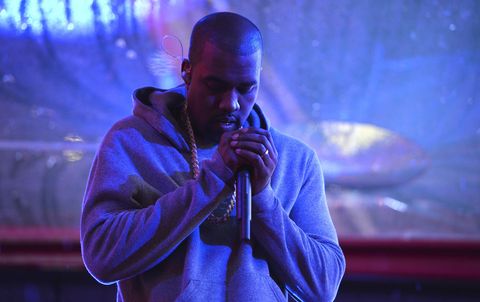 Kanye West continues to be hospitalized at UCLA Medical Center, where he's being held under evaluation following erratic and near-violent behavior. While the rapper's wife Kim Kardashian hoped to have him home on Monday, his hospital stay was extended due to the seriousness of his condition.

A source tells People that West has "big ups and big downs, but this bout seems to be much more serious," and adds that he's been "very paranoid" during his hospital stay.

West is reportedly "under constant watch for his safety," and has yet to be fully diagnosed—though Kim Kardashian "uses words like paranoia" and says "Kanye thinks everyone is out to get him." The source also reports that—according to Kim—Kanye is on "many different medications and that his doctors are figuring out proper doses."

Since West's condition hasn't improved since he was admitted, "his doctors seem concerned."

Mehera Bonner Contributor Mehera Bonner is a news writer who focuses on celebrities and royals—follow her on Instagram.
This content is created and maintained by a third party, and imported onto this page to help users provide their email addresses. You may be able to find more information about this and similar content at piano.io
Advertisement - Continue Reading Below
More From Celebrity
Megan Thee Stallion Stuns With Neon Pink Hair
Phoebe and Pete Wore Matching Initial Necklaces
Advertisement - Continue Reading Below
The Queen to Sit Alone at Prince Philip's Funeral
Royals Announce Who Will Attend Philip's Funeral
Prince Philip Will Not Have a State Funeral
Harry Doesn't Want Drama at Philip's Funeral
How Meghan Feels About Missing Philip's Funeral
Eva Longoria Loves Her Mini Trampoline
The Royals Won't Wear Uniform at Philip's Funeral
Jennifer Lopez and Alex Rodriguez Announce Breakup