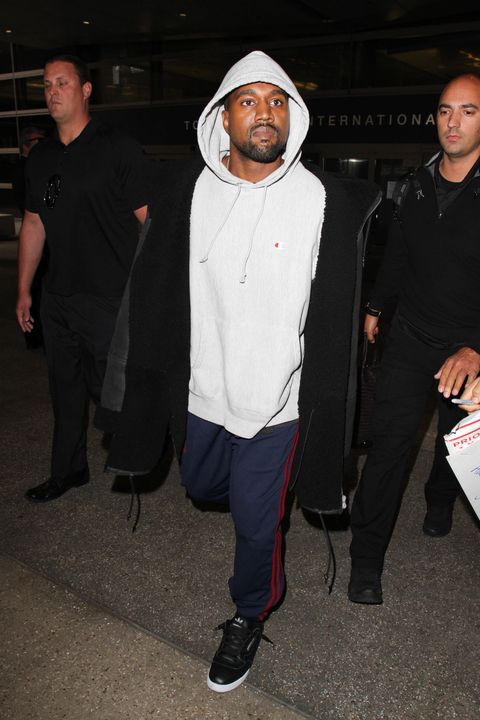 It's been a tumultuous few months for Kanye West, who first had to cope with his wife's terrifying robbery at gunpoint in October and then, in November, had what sources are reporting as a "nervous breakdown" brought on by the anniversary of his mother's death. His Saint Pablo tour was cancelled, he checked into the hospital, and he's been there ever since, with Kim Kardashian at his side.

Reports have just emerged that after a week and a half, Kanye has checked out of UCLA Medical Center and is now at home with his family, where he may receive ongoing treatment.

While there were rumors that production of Keeping Up with the Kardashians would stop in the wake of Kanye's hospitalization, the network came forward earlier this week to announce that the cameras will keep rolling. "Keeping Up with the Kardashians is currently in production and has not been halted," the spokesperson said. We'll just have to wait and see what that means for Kanye, Kim, and their re-evaluation of the spotlight.

Jessica Pels Editor-in-Chief As the editor of Cosmopolitan, Jess oversees the editorial for all of Cosmo's efforts across print, digital, video, and emerging platforms.
This content is created and maintained by a third party, and imported onto this page to help users provide their email addresses. You may be able to find more information about this and similar content at piano.io
Advertisement - Continue Reading Below
More From Celebrity
Simone's Boyfriend Sent Her the Sweetest Message
What Happens on Katie's Season?
Advertisement - Continue Reading Below
Rebel Wilson Recreated This Britney Spears Look
Jennifer Lopez Flew Back From European Getaway
Jennifer Lopez Wears Old Bracelet From Ben Affleck
Simone Biles Cheers on MyKayla Skinner
See the Royals Socialize at a 1991 Cocktail Party
Eugenie Posts Pics from Harry & Meghan's Home
Queen Trolled Tourists Who Didn't Recognize Her
Blake and Ryan Recreated Their First Date on IG