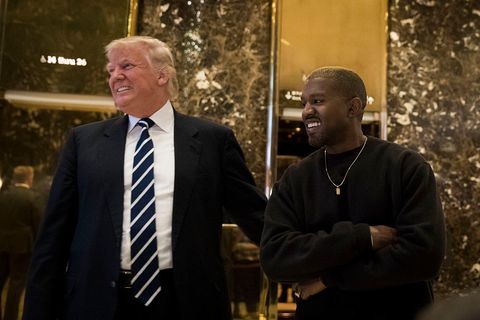 On Tuesday morning, Kanye waltzed into NYC's Trump Tower to take a meeting with president-elect Donald Trump. When they emerged from an elevator together about an hour later, Trump said that Kanye was a "good man" and that they had "been friends for a long time" (??).

They didn't offer much detail about what was discussed, but later on Kanye tweeted that they discussed "multicultural issues" like "bullying, supporting teachers, modernizing curriculums, and violence in Chicago." Most worryingly, he tweeted #2024, which seems to indicate he a) thinks Trump will be president again in 2020 and b) intends to run for president himself in 2024.

Now, he's also shared a photo of a little gift that his new BFF gave him, presumably after their meeting at the Tower: an autographed copy of Trump's Time "Person of the Year" cover.

Just going to keep this gif here for future use: