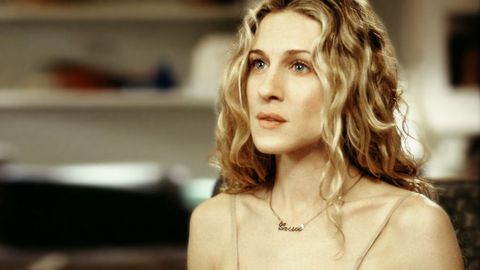 There are simply too many iconic fashion moments to count in HBO's Sex and the City, but if we *had* to pick the most iconic, it would be a toss-up between Carrie's pink tutu, her blue engagement pumps, and her signature nameplate necklace. Which, by the way, she definitely kept once the show wrapped.

"I have the Carrie necklace still," Sarah Jessica Parker recently revealed at the Vulture Festival. "I love it and it's tucked away somewhere safe."

The thing is, she almost lost it—which...UNACCEPTABLE.

Much like Carrie almost lost the necklace in Paris, SJP says she couldn't find the piece during production on one of the movies. "I wish I could play that [Paris] scene again, because now that I've lived through it, I'd do a much better job."

Truly, losing that necklace = the stuff of pop culture nightmares.