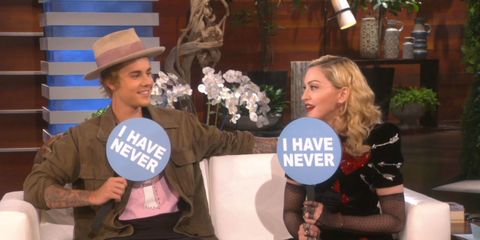 For day three of Ellen DeGeneres's Madonna Week, Ellen brought in her new best friend Justin Bieber for a very special game of "Never Have I Ever." Madonna, legendary rule-breaker that she is, had done nearly everything Ellen asked her about, but Justin, surprisingly, had not. To be fair, Ellen didn't say anything like "never have I ever egged a house," but perhaps Justin is not as much of a troublemaker as he lets on. He's never even gotten kicked out of a club! Or so he says.

But even though you learn secrets about Madonna and Justin like which one of them has had sex with two people in one day (you only get one guess as to who has done that), the best part of this whole thing might be their strange banter. Justin seems almost intimidated by Madonna, while she's having a grand old time trying to make him squirm. "I feel like I'm getting to know my new boyfriend," Madonna says at one point, causing Justin to go in for a cautious hug. What a brave soul, to touch Madonna unbidden like that. Back off, Biebs.

There Is a Whole Show with Celebrities Lip-Syncing, and Everyone You Love Is on It

Bless You, Will Smith, for Doing the 'Fresh Prince' Rap on 'Ellen'

Watch Gwyneth Paltrow and Johnny Depp Play "Never Have I Ever"

Eliza Thompson senior entertainment editor I’m the senior entertainment editor at Cosmopolitan.com, which means my DVR is always 98 percent full.
This content is created and maintained by a third party, and imported onto this page to help users provide their email addresses. You may be able to find more information about this and similar content at piano.io
Advertisement - Continue Reading Below
More From Culture
The Best Lesbian Movies Streaming on Netflix
Listen to the Best New Love Songs of 2021 (So Far)
Advertisement - Continue Reading Below
Who Is Christine Chiu on Netflix's 'Bling Empire'?
Could 'WandaVision' Get a Second Season?
Avengers Fans, Assemble: 'WandaVision' Is Here
Where Is Night Stalker Detective Gil Carrillo Now?
What We Know About Part 2 of 'Lupin'
A Look Back at Princess Anne's Life in Photos
Where Is the Cast of 'Gilmore Girls' Now?
The Most Hotly Anticipated TV Shows of 2021