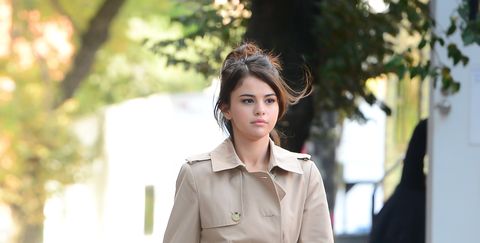 Days after reports came out that Selena Gomez's Woody Allen film costar Timothée Chalamet has donated his entire film salary to charities, People is now reporting that Gomez herself has "made a significant donation anonymously" to the Time’s Up Legal Defense Fund that "far exceeded her salary for the film," per a source close to Gomez. This news also comes shortly after a comment circulated that her mother Mandy Teefey made about trying to dissuade Gomez from working with Allen because of sexual abuse allegations against him.

In response to a fan telling her to make Gomez write an apology for working with Allen, Teefey replied, "Sorry, no one can make Selena do anything she doesn't want to. I had a long talk with her about not working with him and it didn't click. Her team are amazing people. There is no fall person here. No one controls her. She makes all her own decisions. Nomatter how hard you try to advise. It falls on deaf ears."

Teefey went on Facebook yesterday where she posted a long comment making it clear that she has only tried to protect her daughter throughout her career and that Gomez's choices are hers. "I am a mom first," she wrote. "But, I am also my own person. She does not have to apologize for her choices, but let it be known they are hers. I don’t need to be told how to raise my child, handle my family matters or be slammed for having my own opinion. I do not play for fandom, I speak my truth. People with an image have something to hide, people who are real don’t. I did not put my family business in the media. EVER."

"I taught Selena to be a strong woman, but as everyone in their 20s she is finding herself. I am a threat to the people who are trying to take advantage of her because she knows she can trust me and I love her," Teefey continued, perhaps alluding to her objections to Gomez's renewed relationship with Justin Bieber or some of Gomez's friendships. "So, they put dents in our family. That is not love, friendship or the way Gods love works. That is manipulation for selfish gain. My daughter is loving, trusting, naive, funny, hard working, sensitive, emotional and will be a great mother. But, I will never not speak my mind if I feel something is off until I die. I will always be her mother. If she hasn’t muttered anger about me than I have not done my job as a mother."

Shortly after Teefey shared the post, fans noted that several of Gomez's friends, including her close friend and cousin Priscilla DeLeon and assistant Theresa Mingus, unfollowed Teefey on Instagram. Gomez (or Mingus, since Gomez has said previously that her assistant often controls her account) also changed her Instagram account so it's a photo of her rather than an old photo of her mother. Drama.

Gomez, for her part, has stayed silent on her own social media.

Alyssa Bailey News and Strategy Editor Alyssa Bailey is the news and strategy editor at ELLE.com, where she oversees coverage of celebrities and royals (particularly Meghan Markle and Kate Middleton).
Advertisement - Continue Reading Below
More From Culture
The Best TV Shows on Hulu Right Now
The Documentaries You Can't Afford to Miss in 2020
Advertisement - Continue Reading Below
'Killing Eve' Season 3 Review: What's Old Is New
A Super Pink Moon is Coming April 7
Pre-Order These Amazing Books Coming Out in 2020
The 8 Best Rom-Coms of 2020
Got 10 Minutes? Here's What to Watch on Quibi
We Could Be Getting More 'Tiger King'
HBO Is Making Iconic Shows & Movies Free to Watch
Tim Gunn & Heidi Klum Also Wear PJs to WFH