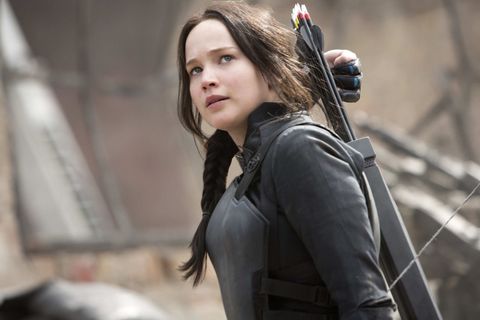 And that's another arrow in Jennifer Lawrence's already-overflowing quiver. (Get it? Get it?)

Dad jokes aside, Mockingjay: Part 1 and Lawrence are both serious runaway hits. The evidence is in the headlines: Jennifer Lawrence made more money than any other actor in Hollywood last year. Jennifer Lawrence holds the world record for "highest-grossing action movie heroine." And now, to match the achievements of its breakout star, Mockingjay just became the highest-grossing film in the U.S. for the second time in a row. (Which is a BFD because no studio has accomplished the same feat in more than a decade.)

Globally, the film has already made $700 million—that's before its February 8 release in China—which brings the box-office total for all three movies to $2.2 billion.

Congrats to everybody who saw it—you helped make each and every one of those nine zeroes happen.