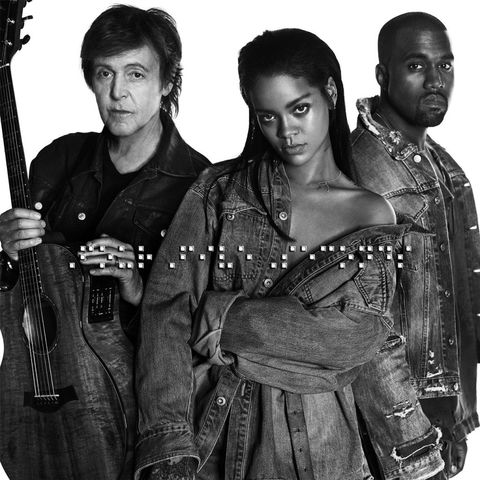 Update, 2/3: The full video for "FourFiveSeconds" just dropped minutes ago. Shot by visual imagery maestros Inez and Vinoodh, it features Rihanna, Kanye, and Paul McCartney sometimes silhouetted but mostly in classy black and white. Kanye even dances a bit!

Original post, 1/25: On Saturday, with very little fanfare, Rihanna announced by Twitter that she has a new song for us to hear—and it features both Kanye West and Paul McCartney. As we've come to expect from completely out-of-the-blue and surprisingly timed music releases, the sound itself is a big part of the shock factor.

"FourFiveSeconds" is Rihanna like we've never heard her—dare we say she gets a little bit twangy? When her nearly-hoarse vocals come together with West's singing (which represents his more melodic moments) and McCartney's guitar, the effect is like a 2015 take on old-school Americana.

This Is How Rihanna Does Office Clothes