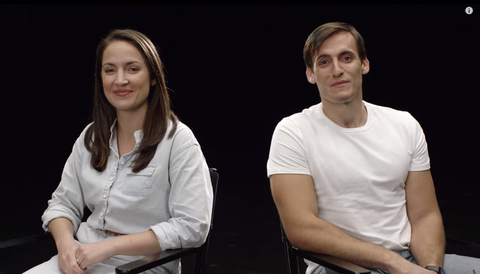 Update 6/9: The young couple who went viral after being aged 70 years (see the video at bottom) had a bigger wedding day than they imagined.

"We realized [the video] was released when we were on our way to our rehearsal," Kristie Scherrer told The Huffington Post. Kristie said many of her friends had seen it before the couple even reached their rehearsal.

Twelve hours after they tied the knot, Kristie and Tavis sat down with their friends and family to finally watch the project—and their reactions are even more heart-warming than the original.

Original post 5/15: No matter who you are—but especially if you're in a relationship with someone you want to spend your life with—you *will* shed a tear at some point during this video.

In The Cut's latest edition of their "100 Years of Beauty" series, soon-to-be-newlyweds Kristie and Tavis allow a makeup team to transform them into older versions of themselves. What starts off as a fun experiment turns into an emotional trip through the future and, charmingly, a glimpse into the life they will soon begin. And at each reveal, both Kristie and Tavis get surprisingly emotional. (Same here.)

"I can't help but think about what the potential last 50 years were," says Tavis."To see her look like this I just think of where we've gone."

Simedar Jackson I'm Simedar, an intern here at MarieClaire.com!
Advertisement - Continue Reading Below
More From Culture
How the 'To All the Boys 2' Soundtrack Was Made
Does 'Bachelor's Madison Prewett Self-Eliminate?
Advertisement - Continue Reading Below
How Much Does 'The Bachelor' Make?
Tales of a Hollywood Con Queen
Who Will Be on 'Bachelor in Paradise' in 2020?
When Will 'The Bachelor' Women Tell All Air?
'The Bachelor' Has Already Finished His Season
The Very Best Rom-Coms of All Time, Ranked
An Investigation Into the Next 'Bachelorette'
The Best Korean Dramas to Get You Hooked