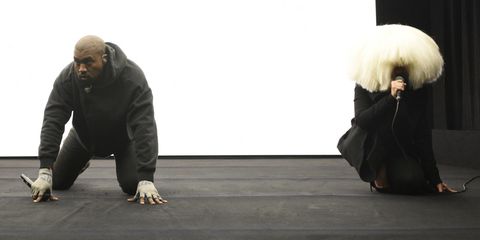 Original Post, 1/6/15: Individually, Sia and Kanye West each have a knack for churning out club bangers and mystifying their audiences while they're at it. Together? It's double the mind-blowing creative energy, as was told by their performance of the rapper's track "Wolves" alongside Vic Mensa on Saturday Night Live's 40th Anniversary special.

Now, the pair has teamed up again with West having co-written and co-produced the Aussie singer-songwriter's new anthem "Reaper"—and it's just the inventive, infectious Top 40 bait I held my breath for. The hook = Taylor-Swift-level gold: You came to take me away / So close I was to heaven's gates / But no baby, no baby / Not today, ohhhh.

The groovy track is the latest single off of Sia's upcoming record This Is Acting, which drops later this month and is comprised of songs she previously wrote for other artists and features a slew of high-profile collaborators like Yeezy.

The teaser snippet below may just be 11-seconds, but its clear: this repurposed number is destined for greatness and I will be refreshing Sia's Twitter page until it drops in full tomorrow.

This Is Acting is due out January 29.

Lauren Valenti Associate Web Editor I’m the associate web editor at Marie Claire.
Advertisement - Continue Reading Below
More From Culture
Listen Up: Gripping New True Crime Podcasts
'The Bachelor' Has Already Finished His Season
Advertisement - Continue Reading Below
Unmissable Horror Movies Coming Out This Year
Who Is 'Bachelor' Peter's Mom Talking About?
Sarah Coffin Might Be a 'Bachelor' Frontrunner
Who Is 'Bachelor' Contestant Victoria Fuller?
Meet the Star of 'The Bachelor's ChampagneGate
Jurnee Smollett-Bell Is a Real Life Superhero
The Best Love Songs to Ever Exist
The Best 'The Bachelor' Memes This Season