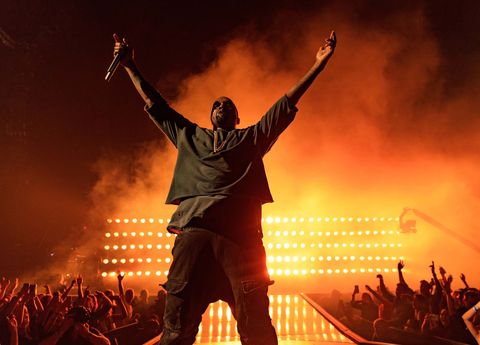 Only, like, the president can declare a bank holiday, but February 11 might as well be renamed in Kanye West's honor for all the effort he's putting into it.

Handed down like an illegible 10 Commandments, the track list for Swish, which drops in 14 business days, features both previously released songs like "FML" and "Wolves" and the fascinating new work "Real [indecipherable squiggles that end in an 'S']." But what's most intriguing of all is the bit at the bottom. "Kylie Was Here"—Is that a bonus track? A youthful prank? Where did Yeezy find a notepad that folds up like the legal kind but also has holes for binder usage?

Compounding February 11's Kanye-ness will be His Majesty's third Fashion Week presentation, which will likely include new earth-tone sneakers for Kim Kardashian to gift Ryan Seacrest.

You're so welcome! New colors coming soon. Will send you those too! https://t.co/Ia39KBPuFI

Prepare the ticker tape parade, boys. At least this time, he gave notice before wrecking the whole NYFW schedule.

Chelsea Peng I'm Chelsea Peng, the assistant editor at MarieClaire.com.
This content is created and maintained by a third party, and imported onto this page to help users provide their email addresses. You may be able to find more information about this and similar content at piano.io
Advertisement - Continue Reading Below
More From Culture
You *Need* to Follow the 'Bling Empire' Cast on IG
Watch the Trailer for the New 'Euphoria' Special
Advertisement - Continue Reading Below
We've Getting a Season 2 of 'Bridgerton'
New Drama Movies That Promise to Move You
The Sexiest New Movies of the Year
A Look Back at Princess Anne's Life in Photos
Where Is the Cast of 'Gilmore Girls' Now?
'The Bachelor' Is Back!
Who Is "Queen" Victoria on 'The Bachelor'?
Matt James' 'Bachelor' Cast: Everything We Know