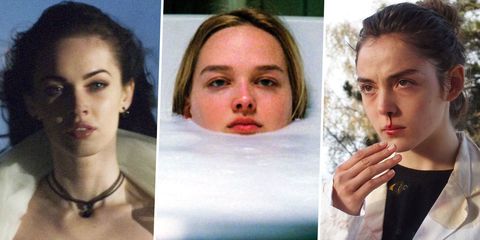 Horror movies aren't known for depicting women well. Female bodies are often treated like objects. They're designed to be looked at, violated, and discarded. But the genre doesn't have to be like this.

Old-school slashers introduced us to the "Final Girl" trope—AKA the girl who survives by being resourceful and tenacious (and ~sigh~ usually by virtue of being a virgin). But many newer horror films have moved toward female-driven narratives involving strong, complex characters. They operate under the true assumption that women in horror can exercise a great amount of agency, challenge expectations, and survive despite the odds being against them. Part of the move toward better female representation is the growing number of women filmmakers working in horror—they make up over half the directors on this list, which is a pretty decent percentage considering Hollywood's track record. Here's the best of what they (as well as some talented male horror directors) have produced since the late '90s.

This Japanese horror movie is about a widower who decides to hold fake auditions to find a new wife. He chooses a woman from his audition process, but things take a turn for the scary when her dark past is revealed.

Ginger Snaps is about sisterhood, desire, and the horrors of puberty—as well as horror in general. On the night of her first period, Ginger is bitten by a werewolf. There are obvious parallels between the physical/emotional changes wreaked on her body by hormones and those wreaked on her body by supernatural transformation. Ginger is overwhelmed by lust for sex and blood, and she revels in the power she discovers.

This film has an all-women cast whose spelunking adventure goes terribly wrong when they get trapped underground. And nope, they're not alone. The six characters are resourceful and determined to survive, even though they're traveling deep into the earth through dark caves where there is no form of communication and limited supplies. The Descent is claustrophobic and tense, and will make you question what it really takes to be a Final Girl.

Teeth is a horror-comedy about a case of vagina dentata—literally meaning toothed vagina. Sweet teenage protagonist Dawn's teeth only emerge as a defense against terrible abuse—and she learns to use them not just to take care of herself, but to seek vengeance. There are scenes in this film that will really make you squirm.

Written by Diablo Cody and directed by Karyn Kusama, Jennifer's Body is a tongue-in-cheek feminist horror movie. Megan Fox is perfectly cast as Jennifer, a cheerleader turned demonic seductress who is "actually evil—not high school evil." She unapologetically uses her sexiness to take what she wants—which happens to be men. You know...to eat. But Jennifer's Body is really about female friendship, which is part of what makes it so dynamic.

Meet Amelia: a desperately unhappy single mother, who's exhausted by grief and raising a creepy, troubled son named Sam. To make matters worse, the monstrous Babadook intrudes into their house, endangering them both. This film is a bold study of the all-consuming responsibility of being a parent, with Amelia a flawed maternal figure personifying the fears and pressures of motherhood. It's also 2017's biggest viral sensation thanks to the Babadook becoming a gay icon.

Blissful newlyweds Bea and Paul arrive at her family's remote cabin-in-the-woods for their honeymoon—when Bea begins to act very strangely. Paul is disturbed by how different his new wife is, and his distress prompts the question: how well do you really know your partner? As events unfold, the film plays with the idea that marriage can change people, and Bea desperately fights to remember who she is. Turns out she's a lot of things, the best of which is a three-dimensional character operating in the world of horror, and that's a huge win.

This beautiful black-and-white Iranian language genre film is a Western-style horror about the unlikely romance between a female vampire and a young man. The vampire is not a stereotypical villain, but a well-drawn anti-hero—who wears make-up, steals skateboards, and raids the record collections of her victims. She chooses her prey carefully, protecting the women of Bad City from its cruel, manipulative men. She is the hero we need.

Set in 1980s post-revolutionary Tehran, this Farsi-language film has an obvious socio-political subtext, and is deeply rooted in feminism. The movie is about a mother who has to protect her daughter from a supernatural threat, as bombs devastate the city and she deals with her own thwarted desire to be a doctor.

Forget the hype about this film making people violently ill—Raw is a compelling story about female desire—more specifically, about a teenager girl that discovers there's something more to her hunger than just teen hormones. Raw explores sexuality, as well as family and social expectations about how women should feel and behave.

This film is a retro-styled delight about a love witch named Elaine, who just wants to meet her perfect man. Unfortunately, her magic is very strong, and she leaves a trail of broken men behind her. Elaine is a woman wholly in control of her body and her actions, and her hilarious determination to find her own happily-ever-after reminds us of the unfair expectations surrounding gender and romance.

A deaf writer is attacked by a masked psychopath and must use her wit and skill to fight for her life. In Hush, Kate Siegel's Maddie lets nothing stop her from claiming her agency in a terrible situation.

The all-female reboot of Ghostbusters was the target of sexist trolls from the moment it was announced. The movie showcased the talents of four of the most talented female comedians in Hollywood and proved that a good story works well with stars of either gender.

Related Story
These Are the Scariest Movies of 2017