Today's Top Stories
1
Professional-Grade Kits for Gel Nails at Home
2
Single Parenting and the Pandemic? No, Thanks.
3
Top and Skirt Sets That Make Getting Dressed Easy
4
Kim Wall Was So Much More Than a Headline
5
On Becoming a Doctor During Two Epidemics
Shutterstock

With a slew of multimillion-dollar fashion and beauty campaigns between them, you'd be forgiven for thinking Bella and Gigi Hadid might be in competition as to who can nab the most fashion gigs. However, according to 20-year-old Bella, battling it out with her older sister for magazine covers and coveted spots on the runway is hardly a priority.

"Most of the time our markets are completely different," the star told Harper's Bazaar Arabia. "And if we get booked on a job and she gets it or I get it, we're both happy for each other."

Having walked alongside her sister on numerous occasions over the years on the runway, and most recently with their younger brother Anwar at Hilfiger's show during London Fashion Week, the Californian beauty said: "There are enough jobs in the world for both of us. There's no reason for us to be mad at each other or competitive. So if she gets it, then good for her." 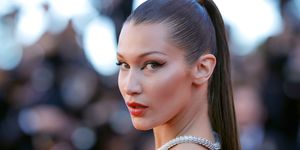 But what if Gigi nabbed a modeling deal Bella desperately wanted?

"We're in the family so she can buy me a pair of shoes," she joked.

When asked how she feels when people suggest that modeling is an easy career, she noted: "Everybody has a different opinion of what hard work is. At the end of the day, if you're exhausted, you worked hard. I'm definitely tired most of the time."

And it's hardly surprising the model is tired given her daily battle with Lyme disease, which causes numerous symptoms of fatigue. As a result of the chronic illness, the brunette was forced to retire from her beloved horse riding, amid hopes of becoming an Olympic equestrian.

Bella credits her strong will and personality for helping her cope with the demands of her career.

"Since I was a kid I've loved helping people. My mom always said that I would go on the street and hug somebody that was sitting on the corner. It was just because I genuinely loved people, and that's something that I want to bring forward with me in my career. If I'm able to change something in the world for the better, then I'll be ecstatic."

Discussing her struggles with online bullying, the model admits she leans on her family for support.

"I have a whole angel family. I think that there's a lot of beautiful spiritual beings in the world. They're just floating, and they're around if you feel a need for them. I draw strength from that completely. It's definitely how I've gotten through the past year and stayed sane."