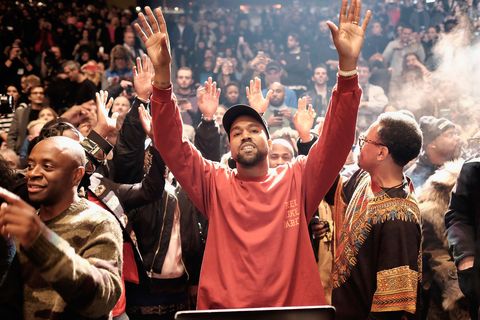 Kanye West debuted the Yeezy Season 5 collection today at Pier 59 Studios in New York. Always one to put on an eventful spectacle (with past shows spanning from Roosevelt Island to Madison Square Garden), the rapper took a more low-key approach this season.

See below for a play-by-play of today's Yeezy Season 5 show.

3:39 PM Models lineup for the finale walk, showing off a range of looks that lend way to a new side of the Yeezy Collection. From denim jackets to jeans and "Calabasas" merch, it appears as though West has switched up his signature aesthetic this season. West did not take a final bow at the end of the show, instead Kim Kardashian's departure signaled the end of the show.

3:27 PM The dark set of Yeezy Season 5 starts with a voice-over followed by videos of models being projected over a black screen in the middle of the runway. Along with its staple athleisure looks, the collection introduces denim for the first time.

This is what's happening at the yeezy show pic.twitter.com/CYK6cy0MFA

3:25 PM: While we're still not sure all the celebrities we can expect at the show, Hailey Baldwin and Lala Anthony were spotted sitting front row:

2:00 PM: According to a photo shared on Instagram, there will be no social media or phones allowed at the Yeezy Season 5 show today—a huge departure from West's show rules in the past.

12 PM: The invitation for Yeezy Season 5 was printed onto a t-shirt reading, "Yeezy Season 5 / Kanye West & Drake / 15 Feb 2017" and also included the phrase "Lost Hills" (a nod to West's Los Angeles neighborhood). The tee has sparked rumors of a Drake x Yeezy song dropping today to coincide with the show, meaning the Canadian rapper may make an appearance alongside West's new collection...