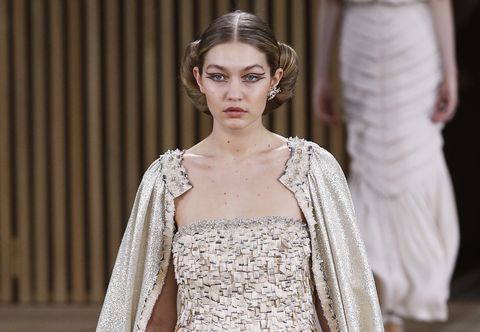 You know you've made it when Karl Lagerfeld calls you up like "Hey, want to wear an evening cape in the fanciest fashion event of the year? Yeah? Cool." Or you could just be a cute, fluffy dog and sit front-row as Cara Delevingne's guest—that's an indicator of success too.

At the Grand Palais early Tuesday, Gigi and Bella Hadid made their Chanel haute couture debuts, both modeling croissant up-dos courtesy of Sam McKnight and embellished, putty-colored dresses presented near the end of the ecology-themed lineup. (FYI: Gigi walked spring 2015 RTW, while Bella landed a spot in the label's Roman Métiers d'Art show in December.)

Kendall Jenner was there too, but once she finished twerking, it was all about Leo Monkey Delevingne.

A star is born.
Getty
Getty