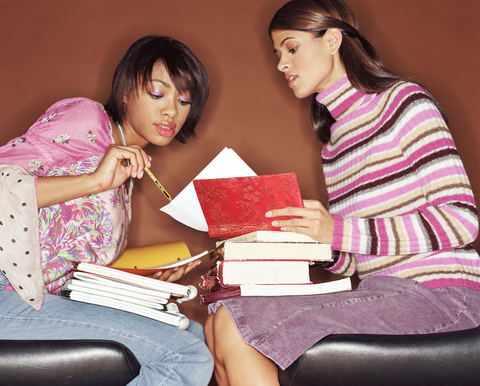 Eleventh grade health class left us with a lot of unanswered questions—primarily, since when is a gym teacher qualified to demonstrate all the intricacies of birth control and sex? Seriously, if people like Coach Carr are teaching the future leaders of the America about reproductive health, the universe is doomed.

You couldn't pay us enough to relive our high school days—Green Day, underage drinking, college admission, uhh, no thanks. We will admit, however, there were some things we wish Mr. Edwards taught us way back when about our sexual health. Just to name a few…

No guy is ever too big for a condom

Chances are they did the whole fist in the rubber bit—or maybe they wrapped it around their head (ew). The point: If a woman can fit one over her leg, a guy can wrap one around his manhood.

The Pill isn't your only option

Just like the quintessential cheerleader, the Pill was all the rage back then. So naturally you were quizzed on its side effects and uses. But it would've been great if they took the time to investigate other method, since ones like the IUD are more popular these days.

Attention school districts everywhere: Why wasn't this a PE option like volleyball and tennis? Strong muscles down there can relieve urinary incontinence (accidental peeing) and help you cross the finish line during sex. You needed this more than hand-eye coordination.

You can have sex on your period

It'll feel weird, it'll unleash hell upon your sheets, and it might make you squeamish about blood—but your time of the month should not hold you back from sex. They could've given you a user's manual all those years ago.

This was the part of the conversation when the boys were separated from the girls into two classrooms. We bet if Jill Soloway was in charge, she'd keep everyone together and explain the mechanisms behind your fluids in a hilarious-but-understandable manner.

To think, we could've ended up in jail and had that on our permanent record if they didn't warn us about these crazy sex laws.

There is such a thing as too much self pleasure

When it comes to your G-spot, no one knows how to push your magic button better than you—but doing it too frequently can "desensitize" your nerves—you'll find it harder to climax during sex with an actual person.

It takes you longer to finish than him

Your orgasm is like, well, the center of a Tootsie Pop. It might feel like you're working forever to reach this delicious center, but once you make it there, YUM. (P.S. apologies for ruining candy.)

Freezing your eggs is a thing

At 17, starting a family is nowhere near your mind—unless you're on MTV. It's strange to imagine putting your eggs on ice so you don't have to worry about their expiration date. Not many people can afford it, and it's a lot to consider—you might never do it. But it's an option you have, and who doesn't love options?

10 Unfiltered Sex Tips for the Best Action Ever
The All-Time Best Vibrators, Reviewed by Experts