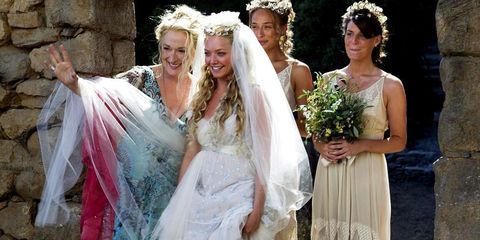 When your nosy Aunt Jenna pulls you aside at your family barbecue and tells you you're too young to marry, for the love of god, please heed her advice—even if you'd rather stick it to her and prove you're ready..

The University of Utah took data from the National Survey of Family Growth from 2006 to 2010 and concluded that if you get married at the age of 20 (excuse me, people actually do this in college??), you're 50 percent more likely to get divorced than if you'd married at 25, and each year after 25 that you wait to get married reduces your divorce rate by 11 percent—woo!—but there's a catch. Once you hit 32 ("or so"), the odds that you'll divorce go up by 5 percent each year. Meh, better that 50 so we'll take it.

This trend seems to be relatively new, since a previous study done with data from 2002 showed that the divorce rate of people who got married after 30 was flatlining instead of dropping, says sociologist Nicholas Wolfinger.

How does he explain this "phenomenon"? Well, if you get married after 30, you've probably had more complicated relationships with exes (and have had more exes in general), which could make you feel more tempted to cheat—tooootally [side-eye]. He adds that the current data doesn't support these theories specifically, so he's not really sure why it's happening. Moral of the story: You're damned if you get married too early and you're damned if you waited too long. How pleasant.