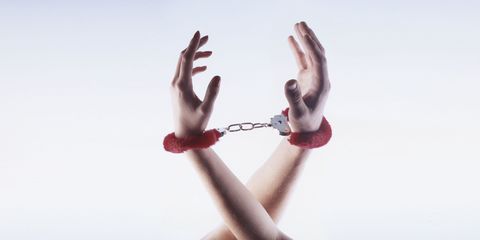 Here, nine fetishes you should know, either because they're good for brunch banter or because you might come face-to-face with them on your next Tinder date.

Or to common folk, sexual arousal through tickling. You probably find that armpit or belly tingling sensation to be flirty—but people with this fetish tend to focus their entire sexual play around tickling. They might incorporate toys such as feathers during sex or request a partner bind their hands and feet as they're being tickled. They could simply get off just by watching someone being tickled, too. Please lower your eyebrow—this is real.

If you hate bugs, do yourself a favor: Close your browser and never EVER Google "formicophilia." For those of you still with us, this is a fetish involving insects crawling on your skin—specific body parts or basically bathing in bugs—because of an adoration for little critters or a love of feeling bug bites or stings. (This is just a personal thing, but I'm now suspicious of anyone who owns an ant farm.)

You know how Humpty Dumpty sat on a wall then tumbled onto his egg ass? In a similar train of thought, climacophiliacs are aroused by falling down stairs. Dangerous, duh. But extra points for creativity.

You'll want to swallow whatever you're eating before you read this: Coprophiliacs are turned on by the smell, taste, and feeling of feces—either from another person or themselves.

This basically redefines falling for the "bad boy." People considered to be hybristophiliacs are aroused by inmates or people in jail—for reasons ranging from armed robbery to murder. Their desires may lead them to reach out to prisoners they've never met before just to establish contact or persuading their current partners to commit crimes.

We're thinking Twilight and True Blood had *something* to do with the rise of this fetish, which caters to people who like playing with actual blood during sex. Activities include smearing blood over a person's naked body and biting skin hard enough to cause bleeding.

Cue the waterworks. Probably stemming from deep psychological roots, people filed under this fetish are attracted to sobbing and tears. 😢

The name kind of gives it away. But as a quick lesson, nasolingus concerns licking or sucking on someone's nose and sometimes consuming the nose's secretions.