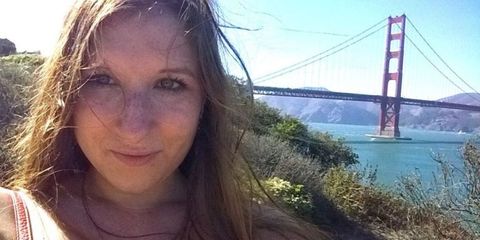 "Bisexuality in men isn't real. They didn't evolve that way."

"Really? Because my boyfriend's bisexual," I responded.

"Oh, I mean, I don't doubt that he actually likes you. I just think so-called bisexual men usually like women more emotionally."

This is the type of awkward conversation I had regularly when I dated a bisexual man, except usually, I didn't speak up. Since my ex was dating a straight woman (me), people just assumed he was straight, and when comments like that were made, I generally stayed silent. I didn't need to hide my boyfriend's sexuality since it wasn't visible, but I definitely didn't bring it up.

During that particular conversation, though, I cracked. I was tired of people telling me my relationship wasn't real and people like my significant other didn't exist.

A recent CDC study found that over 1 in 13 men ages 18 to 24 are attracted to both men and women—a number higher than older generations. It seems that as gay and bisexual people gain more visibility, more people are coming out. But it's taking a while for the rest of society to catch up.

I was tired of people telling me my relationship wasn't real and people like my significant other didn't exist.

Since many people assume that if a woman and a man are dating, they're both straight, people didn't censor themselves around us when discussing LGBTQ issues. My dad mentioned at a family dinner with my boyfriend that he found Brokeback Mountain "hard to watch." A friend of mine told me she couldn't date a bi guy—not knowing that I was dating one—because he'd cheat with a man.

Actually, he asked me to be his girlfriend after only three dates and told me he imagined himself marrying me just a few months in (perhaps jumping the gun, but hey, we were young). And he didn't wander or request a ménage à trois or do anything else to indicate dissatisfaction with dating someone of the opposite sex. Why would he? It's not like we need to date someone who encompasses all the qualities we like at all times. Liking more than one hair color doesn't mean you always need a blonde on one arm and a brunette on the other.

Then there's the assumption that bisexual people, particularly bisexual men, are just using bisexuality as a stepping stone to admitting they're gay. I was constantly defensive, knowing some people believed my boyfriend would not only cheat on me with a man but also leave me for one. No wonder I didn't feel comfortable revealing his sexuality.

Liking more than one hair color doesn't mean you always need a blonde on one arm and a brunette on the other.

But sometimes those stereotypes did get to me. When he spoke about past relationships with men, I repressed the knee-jerk reaction to wonder, "What if he really is just gay?" When he told me some female friends he had met while he was dating men had to get used to me because they thought of him as their "gay friend," I felt embarrassed, as if I didn't belong in our relationship.

My boyfriend was more attracted to women than men. And even if he weren't, all that really mattered was that he was attracted to me. Despite adjusting to others' comments and dealing with my own quiet paranoia (which I knew was something I was taught to feel), his sexuality was actually never a concern. If anything, it was a plus. He was open-minded, supported LGBTQ rights and other progressive agendas, and cared less about playing a masculine role than other guys I'd dated. He wasn't afraid to be sensitive or express affection for his loved ones.

In the end, our relationship ended for completely unrelated reasons. We were two people who fell in love but had little in common. One thing that stuck with me long after our relationship ended is the understanding of how stigmatized bisexuality—and every sexuality other than heterosexuality—really is.  I'd have no problem dating a bisexual man again. Next time, I won't hide it. I want people to understand this population is real and their relationships require no explanation.