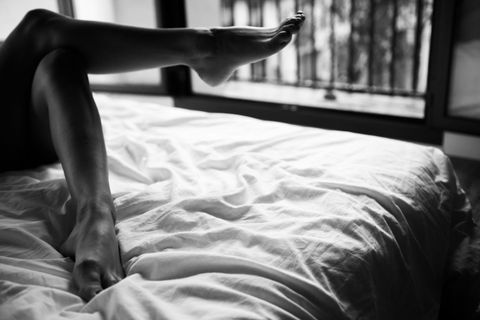 A few years ago, I uprooted my entire life on a mission to find happiness.

I had just quit a 15-year career in tech startups, moved across the country to New York, and enrolled in art school full-time. I went from spending my days (and nights) taking international conference calls and building other people's businesses to reading poetry—and building stories of my own. Serendipitously, my sweet boyfriend, James, also had a great job opportunity in New York, so we moved east together.

Outwardly, everything seemed perfect: a 47th floor apartment near Central Park with a doorman, a dog, and a beautiful man.

But one day, staring at the cardboard boxes we'd never unpacked, I realized I still wasn't happy.

I've always been a vocal feminist and a proper #GirlBoss—before it was even a thing. But in my personal life, I've had a long history of putting myself second. Moving in with James, despite my deep reservations, was only the latest example. Before him, in a different relationship, I'd ignored our sexual incompatibility—and in turn my own pleasure. I found myself unsatisfied, depressed, and 30 pounds heavier.

"I wanted to understand who I was sexually when I wasn't saddled with labels like 'girlfriend' or 'prospective wife.'

The pattern was clear: I was unable to articulate my needs in a committed relationship.

With James, I'd once again come to a place where I couldn't recognize myself. We'd essentially become roommates who never had sex anymore. We decided to separate.

So, in the same way that adventurers set off to backpack across Europe before turning 30 or climb Mount Everest before they die, I set a goal to have sex with 100 partners before my 40th birthday. Along the way, I would aim to regain control of my own happiness, and reconnect with my fleeting orgasms—I wanted to understand who I was sexually when I wasn't saddled with labels like "girlfriend" or "prospective wife."

3 Things to Know About my Sexual History:

And with that, I signed up for a slew of online dating sites and was on my way.

Stewart, a literal millionaire I met online, charmed me with the wit and thoughtfulness of his profile. We met at an upscale café. He was wearing Gucci loafers and a perfectly matching silk handkerchief. Money was his preferred pickup tool, I learned, as he tried to win me over with private airplanes, beachfront properties, and proposals to whisk me away to a ski weekend. He joked that by our third date I'd be obsessed with him.

I found his confidence to be wholly unreasonable—and very attractive. So I invited him home. Inspired by the tension, I wanted what happened in my apartment to be hot. But it was entirely mediocre.

I chalked it up to first-time nerves and agreed to visit his house in the Hamptons the next weekend. After all, I hadn't had an orgasm, so it didn't count yet anyway—and I was determined.

Things were pleasant enough, until the awkward moment when he clumsily felt around my lady parts in the dark. Again, it wasn't working. Normally, I would have just gone along with it or pretended. But this time, there was rule number three.

I had to show him the way.

As he continued bumbling through, I tapped him on the shoulder. "Do you have a headlamp?" I asked, thinking of the camping gear I'd seen in his garage.

After rummaging through his gear and cracking a few jokes, he put the LED lamp around his head and jumped back into bed. I gave him step-by-step directions, showing him what felt good to me.

Slowly, I felt my body react—the first orgasm a man had given me in ages.

Ultimately, things fizzled with Stewart. But, a small victory: I had spoken up for myself, with a relative stranger. I was ready for the next adventure.

In art class, I met a brilliant writer 10 years younger than me. First, we met to discuss our work. He had been a fashion photographer and hearing him expound on the beauty business turned me on—as did hearing about how the patriarchy prompted him to quit his job. He was unassuming and scrawny, but he also stood up for my work in class during critiques.

Slowly, we became enamored with each other's brains, talking late into the night at our favorite libraries and cafes. Finally, one night at my apartment, tea turned into making out and then slow, sweet, quiet sex.

For so long, I'd experienced sex solely in my physical body—it was like this animal act that I happened to do with a person I really liked. To that point, it felt electric to finally be with someone who stimulated me mentally. I'd never taken the time to explore a cerebral connection like this in a sexual capacity.

After a while, though, when it was clear he wanted more than I was prepared to give, I realized I had to move on.

Scrolling through Tinder one day, I saw a profile I loved (now there's a rarity). There was a reference to feminism (bonus!), Rilke, and the phrase "no vanilla." He had full lips and a deliciously half-Bosnian and half-Spanish look. In person, he had the gentle manner of an English major with the vocabulary of a kink-ster. He was in an open relationship and loved dominant sex.

I sat across from him in a chair while he told me how this was going to work: He was going take my clothes of and take control of my body. He explained that I'd have to tell him when to stop. He wasn't going to go easy on me—if things didn't feel safe, I should speak up.

He grabbed a handful of my hair and pulled my neck back. "Now you play by my rules," he said. His gentle demeanor disappeared, and he started barking orders. It felt exhilarating and terrifying, and somehow bright and clear. Generally, I'd always been in charge, and now, for the first time, someone was taking total control of me.

I came back for more.

The next time I saw him, the orders started right away.

"Get on your knees," he said. "Lift your chin, now!" Then he pulled a cloth out of a bag. A blindfold went over my eyes, and I froze. Naked, on all fours, I'd never felt so vulnerable before. My heart started racing, and I wasn't sure why. He intuited my hesitance. "Are you okay?" he asked, checking in with my comfort level. "You didn't follow the rules," he said as he took the blindfold off. "You should have stopped me if you're uncomfortable."

"I need you to promise me that you're not going to hurt me," I said, in a small voice I didn't recognize.

"You need to tell me everything you're feeling," he said, holding me. "I want you to know that you're safe. You can feel safe with me." After a while I told him that I did, and that I was ready. He put the blindfold back on, and we started again.

In his pushing for me to articulate my needs, I felt more protected than I ever had—with anyone. And then, I proceeded to have one of the best orgasms of my life.

I had been doing some consulting work on a TV show and was often in contact with the producers. I had seen clips of the show dozens of times, and I hadn't really thought twice about anyone in the cast. But when I met the director, Gabrielle, and I was smitten.

Sexy and poised, with dark, cat-shaped eyes, she charmed the room. Wearing a grungy scarf and a well-tailored military jacket, she seemed both confident and brilliant. As I watched her operate, I felt a slow attraction taking shape: I'd never even considered being with women, but I just wanted to be close to her—to be walking in step with everything she was about.

Later, at an awards ceremony, we texted all night, even when sitting right next to each other. At drinks after, I confessed. She looked at me, startled.

"I'm seeing someone, plus, you're straight," she said. She turned me down.

Five months passed, during which I slept with other people—but I thought about her.

Then after a night together, she let me kiss her. Eventually, she agreed to stay with me for a weekend. I was nervous that I would be terrible, that I wouldn't know what to do. So I let myself be led. She took over, telling me exactly how she wanted me to touch her. Then, she explored my body for hours, getting familiar with the sounds I made, finding exactly what I wanted, letting it go, and finding it again.

This is where my oral sex rule broke down. I used to think oral sex wasn't "real" sex—but the Power Director opened my mind. It can be just as intimate and just as powerful. So yes, it counts.

I had never been multi-orgasmic, but with her it happened, over and over. It felt like she was opening a space in my body that I didn't know I had.

Then came the deal breakers: She wouldn't be with me unless it was in a monogamous relationship. Although I saw in her a truly fantastic hypothetical partner, I still felt like staying single.

The Power Director and I were together for three intense months before we decided to go back to being just friends. Then I celebrated my big 40th birthday—just 9 partners short of my 100 person goal.

Friends flooded me with questions: if I'll go back to the challenge (200?), if I'll date another woman, and if monogamy is even for me. And the answer, if I'm honest, is—I don't know yet.

What I do know from my 100 Partners Challenge is that I can finally trust myself to walk away from the relationships I don't wholeheartedly want and to seek out experiences that will bring me joy. I can take control and ownership. And if I'm still curious, I can spend the next decade figuring it all out.