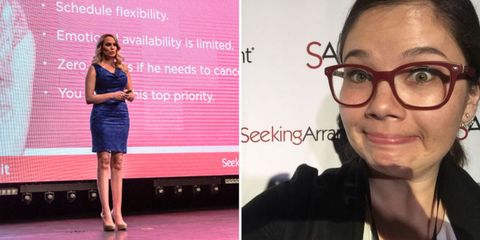 I once considered seeking an arrangement with a Sugar Daddy. I was fresh out of college in Los Angeles pursuing what I was sure would be an illustrious acting career. But as I waited for my big break, I also waited tables. And I hated waiting tables. Being a Sugar Baby—a young woman who goes on dates with wealthy older men, or Sugar Daddies, in exchange for money or gifts—seemed like it could be better than waitressing. In the end, I never pursued an arrangement. The social stigma of being a "kept" Sugar Baby made me apprehensive, and besides, weren't all Sugar Babies supposed to be young and hot? I look vaguely like Macie, the Seal Girl from As Told By Ginger.

Enter Seeking Arrangement, an online dating site for those interested in the Sugaring lifestyle, and their second annual Sugar Baby Summit.  When I was first asked to report on the Sugar Baby Summit, I'll admit I was secretly hoping the conference involved actual sugar, preferably chocolate. Turns out, it was a boot camp of classes, panels, and networking opportunities for experienced Sugar Babies and newcomers alike. I wasn't sure what to expect, other than sticking out like a sore thumb.

Here's how I imagined I would look to the other Sugar Babies:

Instead of a room full of Babies skating by on their looks, I was surprised to find a group of interesting women from a variety of backgrounds who treated Sugaring seriously, like a job. Was I mistaken for not pursuing a life in Sugar earlier? Or was it all too good to be true?

I arrived to the Summit in Hollywood, California, housed in a swanky LA nightclub that boasts an interior pulled directly from the set of The Great Gatsby. As I walked through the plush art deco hallway, I saw the stage set with at least 100 chairs. Was it possible that there were that many Sugar Babies coming? (Spoiler alert: there were more. Additional chairs had to be added later on.) In the background, the beat of TLC's No Scrubs thumped. The DJ was taking a very literal interpretation of the day's theme.

As the day went on, my vision of young, leggy women roaming the room, congratulating themselves on their genetic gifts turned out to only be half right. Sure, there were the model types who came in party dresses and heels, but there were also casually dressed women, thicker women, older women, and a handful of men. Despite this variety in "flavors of sugar," the Babies were all serious about honing their craft. A 21-year-old woman who I'll call Sugar Cube, (not her real name, duh) had been sugaring for over a year, and had found success—a man she currently sees paid her $1,000 for their first meeting. But she wanted to improve upon more advanced Sugaring skills, like negotiating, and was willing to travel from San Francisco to the conference in LA to do it. Ms. Cube was not the only out-of-towner; women had traveled from Texas, New York and one all the way from London. These travel expenses were on top of the ticket cost—$100 each, and that's not including parking.

Sugar as Part of a Substantial Diet

When I got ready for the conference, I wanted to feel like I fit in, so I tried to shed as much of my Macie, the Seal Girl, persona as I could. I bought Spanx. I wore my trendiest trouser. I went to yoga three times that week, which for the record is three times more than I usually go. Though appearance is a huge part of being a Sugar Baby, there is a lot more work to it. When talking to Sugar Sisters Sharie and Jagar Grand, actual sisters who sometimes work as a Sugar Duo, they stressed the importance of conversation. The Sugar Sisters "stay informed" on current events, sports, and the arts so that they can converse with their Daddies no matter their interests. They also gave me some fashion tips. "Never wear flats," they told me, almost in unison. I tried to shove my flat-wearing feet underneath my chair as far as I could.  Despite my embarrassment over my woefully sub-par footwear, I could see the appeal of paying for time with the Sugar Sisters, they were contagiously funny and upbeat. And Sugar Daddies compensate them well for that pleasantness—most recently with a new car.

The classes I would go on to attend during the day began with crafting the perfect profile, going on first dates, and ended with finances and negotiating allowances. Most of it wasn't shocking: they advise rotating out profile pictures regularly to attract a Daddy, and always wearing makeup, natural makeup—stay away from red and pink lip colors. (Sorry Lip Kit fans.) But what did intrigue me was, on top of this, a good Sugar Baby is supposed to have a career path outside of Sugaring. Whether it's starting a business or going to school, Sugar Babies, I learned, should be ambitious. The Sugar Sisters are retail managers. Candice Kashani, our teacher for the First Date and Safety class, used Sugar funds to pay for law school. Jordan Hasty, another experienced Sugar Baby and teacher of the highly anticipated "Negotiating an Allowance" class, is running for Congress.

Even CEO and founder of SeekingArrangement.com Brandon Wade advised women who were in dire financial straights against seeking arrangements. After all, a Sugar Baby must be aware of their boundaries and be able to say "no" when they feel uncomfortable. Those who really need the money are less inclined to enforce their boundaries, he warned, which can get dangerous.

As the final panel ended, I was surprised to find sex was barely mentioned. When I was first researching the Sugar Lifestyle, I was confronted with stories of young women having sex with older men they didn't like; sex and Sugar Babies seemed to go hand in hand. Hasty used part of her Negotiating an Allowance class to clarify that Sugar Babies are not paid for sex; Sugar Babies are paid for their time and the enhancement they bring to their Daddy's life, which coincidentally is what makes it legal. Ava Kinsey, a current Sugar Baby and teacher of her own Sugar 101 classes in Manhattan, finds that the most pervasive stereotype surrounding Sugar Babies is sexual; however, Sugar Babies don't have to become intimate with their Daddies. In fact, Kinsey exclusively participates in platonic arrangements.

Though the conference kept the positivity level at roughly 1,000% the whole day, I couldn't help wondering about the parts they glossed over. The controversial stigma persists, and the attendees were quick to say so. During a question and answer portion, a Sugar Baby/law student expressed anxiety at her peers discovering her life of sugar. After all, lawyers tend to lean conservatively and she didn't want her career prospects ruined by other's preconceptions. Kashani encouraged the nervous Sugar Baby to share only what she was comfortable with, and to keep her Sugar secret if that made her feel better. Though the answer pacified that particular Sugar Baby for now, the Internet makes secrets very hard to keep, and with the future of a career in question, this can prove a real risk of the Sugar Lifestyle.

Despite the upbeat spin the panelists used to answer questions, it's not all Sunshine and Unicorns for Sugar Babies. The ratio of Babies to Daddies is about one in eight, with 50% of Sugar Daddies uninterested in giving a monetary allowance—some prefer to give gifts instead. Some Babies can't even get that far. During the Question and Answer portion, a Sugar Baby expressed concern over the lack of messages she received, and feared it had to do with race—she described herself as "brown." The panelists couldn't give her a satisfying answer, simply commiserating that racist Sugar Daddies exist and encouraging patience—"you'll find a Daddy one day!" And the drawbacks go beyond the financial—the emotional expectations of Sugar Babies seem unfair in comparison to their Daddies. In the "Terms of Use" class, Kinsey explained that though a Sugar Baby might not be her Daddy's priority, she must make him feel like her priority. Is that kind of emotional imbalance worth the car?

Though the positivity of the event was infectious, it was clearly curated. There was an entire pamphlet dedicated to Safety with special emphasis placed on anonymity. Babies were encouraged to use a fake number, an alias, even going so far as to use profile pictures that were not on their social media accounts, lest a particularly curious Daddy reverse image search them. I wondered why Sugar Babies had to go to Superman lengths to keep their identities secret. Were there a few Lex Luthers hiding amongst a group of well meaning Daddies, or was there something inherently dangerous about Sugaring? I thought back to the beginning of the day, when I was trying to interview one of Babies in attendance. A casually-dressed Sugar Baby approached and offered to speak with me, but an employee politely turned her down to bring me a Sugar Baby of their choosing. The level of control over their image went from benign to North Korea-levels when I overheard an employee, walking a pre-cast Sugar Baby to an interview, reminding her to keep it positive. I wondered why they were so careful, and if there was a side to the lifestyle I wasn't able to see.

After the conference, a Masquerade was held for the Sugar Babies to meet potential Sugar Daddies and implement the skills they learned during the day. The night was an expensive one, another $100 for admission for the Babies and starting at $250 for the Daddies—prices rose up to $4,000 for a VIP experience. The party, a sea of beautifully dressed women, was a visual representation of the uneven ratio, and some women I met expressed frustration at the competition for the men's time. Sex was a more present topic of conversation at the party, serving as a gentle reminder that sex seems to be a natural part of many arrangements. As the ratio between men and women increased, I decided to leave talking to the Sugar Daddies to the professionals, for once happy for the lack of attention my Seal Girl look garnered. As the beat of Kanye's Gold Digger thumped on—I decided there was a different kind of sugar I would rather spend time with—a chocolate fountain in the corner.