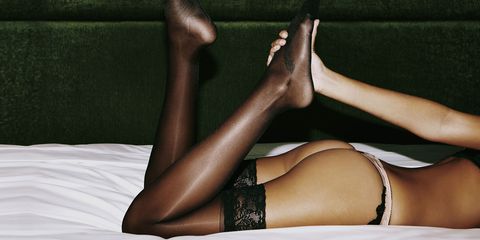 Complete honesty ahead: I've been with my live-in boyfriend for a year now, and while our sex life is certainly fulfilling, it's not necessarily...kinky. We know what we like, what we don't like, and, with our insane work schedules, sticking with the simple stuff comes easier than spending hours on, say, shibari rope bondage.

But I really don't want commitment to give way to sexual monotony. It's such a cliché! I want to keep our sexual escapades as exciting as they can be—plus, it's important to make room for your wild side, right?

"If we can see ourselves being simpatico with money and neuroses and hectic work schedules, then I also need to know if we can handle a butt plug with skill."

Sure, I've experimented in other relationships, but I haven't in this relationship. And considering I'm in love with this partner, it's high time we raised the bar to see where we can go sexually as a couple. If we can see ourselves being simpatico with money and neuroses and hectic work schedules, then I also need to know if we can handle a butt plug with skill.

So, in an effort to up our sexual prowess, I declared a mission: We try something new in bed every week for eight weeks to incorporate more kink to our routine.

"we laughed our asses off."

I'll be adding this to our repertoire.

Outside of the bedroom, if my boyfriend ever called me a "slut," I'd tell him to pack his stuff and get the fuck out. But in bed, being called a "slut" is apparently a big turn-on for me.

I also date women, and back when my boyfriend and I were just friends, we used to always talk about girls together. Even though we haven't slept with one together (yet!), it was still invigorating to swipe through Tinder as a team and check out women as a pair, not only for a turn-on, but because it reminded me of our friendship and the fun we have together.

"think of butt plugs like engagement rings: If you bring one home to your partner and it's the wrong size, it's a snafu."

While inside me, on my command, he slapped me semi-gently, just enough to sting. I *instantly* liked it. The intensity of the sting coupled with the taboo nature of the act and the aggressive power dynamic put me that much closer to orgasm. Because my partner is respectful in real life, it's hot to watch the dominant side of him emerge during sex.

But the dynamic didn't quite work in the other direction. Later, when I got on top and (with his permission) slapped him, he winced. My heart melted like I had just kicked a puppy, so I had to stop. Submission in bed comes naturally for me, but I'm still working on becoming a better dominant.

We've already done about every sexual position I can think of, sans the weird ones you read about for the shower. At 28 I already have lower back problems—I don't need to slip on conditioner that may have doubled as lube. As I scanned my brain for new sexual positions, it dawned on me—dead fish! On Reddit and Urban Dictionary I had heard this term mysoginistically used to describe when women are lifeless during missionary. But what if just relaxing while the man does all the work is actually kind of awesome? Only one way to find out!

One night as we were having sex before bed, he was on top, and I unwrapped my legs from his waist and went completely limp. It put a delay in the orgasm train, as the position was far too passive for me. I like being *active* during sex, wrapping legs around my partner, touching, pulling, hugging, and holding, so this is not something I would be interested in trying again, but we laughed our asses off.

My biggest sex mantra for straight sex is always: more foreplay, more foreplay, more foreplay. Too often men just stick their penises inside women and think that sex begins at penetration and ends at their climax. Sure, everyone loves a quickie sometimes, but sex should also include fingers, mouths, toys, and sometimes—gasp—fists! Or at least as many fingers as you can or want to get inside there. Don't believe the old wives' tales. If a vagina can birth a baby, it can take more than a few fingers in foreplay without becoming "stretched out."

We have a Sunday night tradition. Dinner, sex, then Game of Thrones. It's important to have the sex before the show starts because I tend to get super sleepy after watching TV, Game of Thrones is notoriously rape-heavy (not a turn-on for me), and lying on the couch after we've both come creates an extraordinarily relaxing viewing experience.

Jaime and Cersei, the incestuous twins, often get painted in an evil light, but I find Cersei's cold ambition and strong family values endearing, and Jaime is just a big goof. So, to spice up one Sunday, I pretended that I was Cersei and my boyfriend was Jaime during pre-Game of Thrones sex. (We do look a little bit similar, so: bonus.)

Since I'm a role-playing novice, it felt best to start small. So it was all mental role play, meaning we didn't quite recite dialogue from the show or call each other Cersei or Jaime (next time?), but even just imagining that we were these characters kicked up the sexual stakes and brought yet another hot dynamic into our bedroom. I heard once that the biggest sexual organ is the brain, and role-playing, even in its smallest, most pedestrian form, confirmed this for me. Imagination is not overrated.

After a long day of work, ordering nachos and binge-watching Veep can seem much more appealing than the physical exertion required to get it on with showmanship—but it's worth it. Devoting the energy to an exciting, sometimes unpredictable, and constantly evolving sex life is satisfying in a way that Game of Thrones will never be.