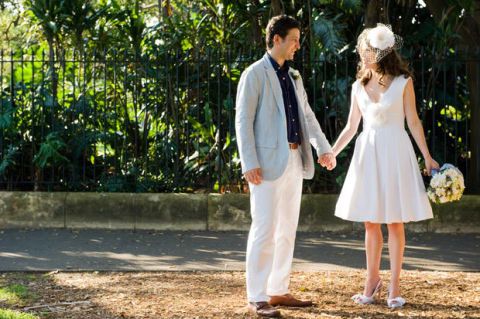 "Are you the bride?" the woman said to me in a sweet voice, her head tilted, as if she were talking to a baby.

I held out my yellow wrist band to show her that I was indeed the one planning a wedding.

"You have to try the most delicious cake," she said, directing me past the throngs of other women at this bridal show, to her booth. The red velvet cake was delicious, and the wedding favors at the booth next door were adorbs.

There was only one problem: I wasn't planning a traditional wedding. I'd come to this ginormous trade show event to get some ideas (and maybe even win raffles like free honeymoons or kitchenware), but I had no intention of spending $1,000 on a cake or even having wedding favors.

Solomon and I wanted to have a simple picnic wedding in the park. But from the start, it seemed so hard.

"I don't understand," my mother started in, soon after our engagement: "Where is the ceremony going to be? Why is the reception somewhere else? Will I be able to sit down?"

She wasn't the only one. My future mother-in-law was super interested in the food. "What will we eat? Will there be enough food? There better be enough food."

Friends also chimed in with opinions. "Well, you can't have it outdoors, because it might rain," one said. "You're not having a buffet, are you? It's so buggy!" said another.

The truth is, we didn't know the answer to most of the questions. We had a vision of what we wanted for our wedding, but it was all in our minds. We'd never seen a celebration like the one we wanted. We had to create it ourselves.

These days, plenty of people want to have non-traditional weddings, but they will likely come up against a lot of pressure urging them to just have a "regular" wedding.

Once people hear that you're engaged, everyone from well-meaning family members to friends and acquaintances (even people you don't plan on inviting) will expect the usual fanfare: a sparkling diamond ring and proposal story, to a wedding shower and bachelorette party, to dress shopping with all your bridesmaids, then the big day, otherwise known as The Most Important Day of Your Life. (TMIDYL)

But I didn't want any of that. I didn't want a diamond, so we got a small blue aquamarine stone. We had no big, staged proposal on one knee. I didn't want a shower (I'd hated spending Sundays ogling friends' household appliances), and preferred to shop on my own. I'd go out with my girlfriends, but only if the bachelorette party would not include tiaras or strippers.

I was just trying to be true to myself—but I came off like the Grinch who Stole a Wedding. I knew that everyone had good intentions, that they loved us and just wanted to celebrate together, but they did not understand that all that hoopla wasn't for us.

We wanted something uniquely us. And despite the questions everyone asked, the doubts everyone expressed, we had to stick to our guns at every turn, otherwise we'd cave.

And that's what I realized at the bridal show. In many ways, having a traditional wedding is easier than going outside the box. There's a process for a formal wedding. It varies somewhat ("do you want to offer chicken and fish or just chicken?"), but there's a usually a template: Hors d'oeuvres, then ceremony, followed by bride and groom introduction, then first dance, etc. etc. etc. That's why it's called "traditional" – thousands of others have done it the same way before you, and thousands of others will after. And the wedding industry, with its big wheels turning, is equipped to help brides and grooms plan it: there's no need to recreate the wheel – except if you're like me, and you want to.

As I walked around the bridal show, I couldn't help the sneaking thought, "Wouldn't it just be easier to give in?" I could book a hall, hire a caterer, check off a menu, find a band, and boom! I'd be done. There would be no more questions from anyone, and I could stop stammering "I don't know yet" to a vision I wasn't sure existed.

Then I thought about my husband, and our promise to each other not to let our wedding planning get out of hand, or become something we did not want it to be. He wouldn't want this – any of this, no matter how tasty the ganache.

So I tore the yellow bracelet off my wrist, dropping it into the garbage can at the exit. Maybe I'd win a free honeymoon, but who knows? I walked outside of bridal fairyland, into the darkness, ready to take on the unknown.

5 Annoying Things Brides Do That Are Totally Reasonable

10 Most Gorgeous Wedding Gowns from Spring 2014

9 Wedding Dresses for the Non-Traditional Bride

Photo Credit: Getty; Amy Klein is a writer based in New York City

32 Unexpected Valentine's Day Date Ideas
How a Fixer-Upper Helped Me Through My Divorce
My BF Left Me the Day of Our Home Closing
How Buying My Condo Helped Me Come Out
The Best Dating Apps for People Who Hate Dating
The All-Time Best Vibrators, Reviewed by Experts
I Threw Up Officiating My Friends' Wedding