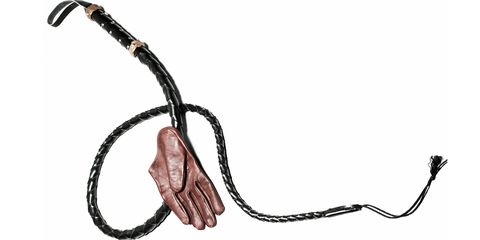 The moment I heard that Fifty Shades of Grey was coming out, a question popped into my mind: Who out there is actually engaging in S&M (or B, or D) activity? From bondage to discipline to whips to handcuffs, who's got their own mini (or massive) Red Rooms of Pain?

So, like any good journalist, I asked just about everyone I could find. At bars, coffee shops, on the street, over formal dinners I would ask this most intimate of questions. "Do you…?" Here's what I found out.

Everyone likes to think they're kinky.

Most people I talked to seemed, at some point or another, to have tried something a little "naughty." And according to the research, a percentage of the population is engaging in genuine BDSM activity regularly. There are surprisingly few studies on this topic, but a 1990 Kinsey Institute report states that 5 to 10 percent of the U.S. population engages in sadomasochism at least an occasional basis. Around 11 percent of men and 17 percent of women reported trying bondage. And a 2005 survey conducted by Durex reports that 36 percent of adults in the United States use masks, blindfolds, and bondage tools during sex, compared to 20 percent worldwide.

further. As my friend Todd said, "If we're two consenting adults and I want you to punch me in the face while giving me a hand job…and you're into that? Great."

How does this play out on a practical level in a healthy relationship? My friend Marissa had a dream one night that she used nipple clamps and, upon waking, asked her husband to order some online. He was willing to give it a shot. It turns out she doesn't like them in real life. But hey, she was glad they tried.

The people who don't do it are the kind of surprising ones.