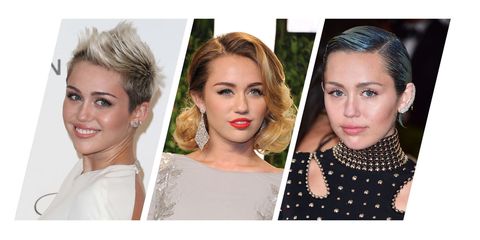 Back when Miley Cyrus was playing Miley Stewart playing Hannah Montana, she sang that, when you mix it all together, you get the best of both worlds. Today, even though she's lightyears away from her Disney persona, she still applies that mantra—to her hair. Ahead, see the best, brightest, and punk-iest looks from her diverse body of work.

How cool is this shot? At rehearsals ahead of this weekend's VMAs, she chills out with air-dried texture that shows off her dark roots and bleached tips.

Earlier this summer, the more gradual fade we just saw was more a half-and-half deal.

Miley knows: A topknot gives you more of a neck when your collar is high. Some tendrils sweeten the deal.

In another great updo, a voluminous bouffant to go with her new, laid-back vibe.

The sort of hyper-groomed, retro look we'd never have seen on her just a few years ago.

Braided pigtails, curtain bangs, and a bloom stuck in there—classic.

A bit of height and some wet-look product gives a deep side part some edge.

A big difference a few months make, eh? This is a great example of the versatility you can manage even when your crop is in a could-be awkward growing-out stage.

Turning back time, we have the aforementioned crop close to its original state—but tinted blue especially for the Met Gala.

Swept back from the face and slicked back tightly at the sides for a masculine/feminine evening look. Never let it be said short hair means limited options.

Told you so re: topknots. This one must've been facilitated with some extensions.

Now, for the next two, a very slight variation in the bangs. (This one's got a bit more length in front.)

Versus the OG, which might just be her *very* best look ever, IMO.

The Met Gala theme this year was punk, and her hair delivered.

A better fauxhawk than most soccer players'.

Who is she? (It's still Miley, but with a collarbone-skimming lob in a darker color than we've seen on her in ages.)

Remember when she stepped out that Oscars season with Liam Hemsworth, looking like this, and we were all silent because our jaws had dropped to our chests? Major.

Her darkest shade (probably ever) really brings out her eyes.

Next
The Khloé Kardashian Hair Lookbook 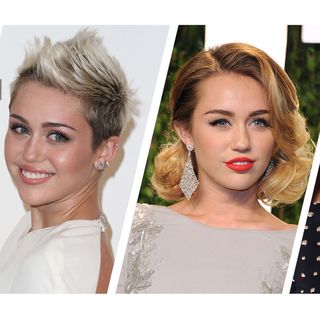 Advertisement - Continue Reading Below
Chelsea Peng I'm Chelsea Peng, the assistant editor at MarieClaire.com.
This content is created and maintained by a third party, and imported onto this page to help users provide their email addresses. You may be able to find more information about this and similar content at piano.io
More From Hairstyles & Cuts for Women
Your Ultimate Guide to Trimming Your Own Bangs
Pretend You're on Vacation With Beachy, Wavy Hair
Advertisement - Continue Reading Below
The Hair Trends You'll Be Seeing Everywhere
Everyone Can Rock Short Blonde Hair—This Is Proof
Layered Haircuts For Every Face Shape
Protective Styles to Inspire Your Next Look
Spring 2021 Hair Ideas to Text Your Stylist
Short, Chic Haircuts to Add to Your Mood Board
Stunning Cornrow Styles You Should Try
Just a Ton of Evidence That You Need a Pixie Cut