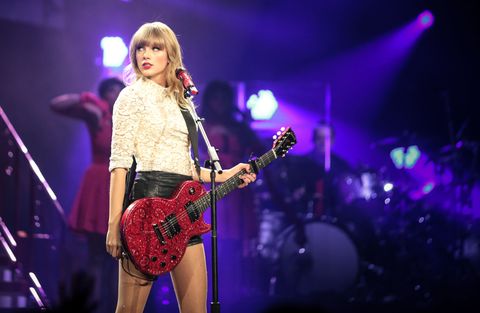 There are now two things you ought to know are off-limits on Planet Taylor Swift: her cat's appearance and using her lyrics to deduce whom she's dated.

As a guest on Australian radio show Jules, Merrick & Sophie, the singer-songwriter defended her practice of writing about her life as "artistic integrity," meaning she's kept a painfully honest musical diary since 16 and isn't about to change now. Fine. But what's really interesting is how she'd respond to people who say "she only writes songs about her ex-boyfriends."

The hosts simply nod in agreement because what else can they they do?

Listen To Taylor Swift's Intense New Song 'Out of the Woods'

Taylor Swift's New Album Isn't Going To Be About Romance

Chelsea Peng I'm Chelsea Peng, the assistant editor at MarieClaire.com.
This content is created and maintained by a third party, and imported onto this page to help users provide their email addresses. You may be able to find more information about this and similar content at piano.io
Advertisement - Continue Reading Below
More From Celebrity
Simone's Boyfriend Sent Her the Sweetest Message
What Happens on Katie's Season?
Advertisement - Continue Reading Below
Rebel Wilson Recreated This Britney Spears Look
Jennifer Lopez Flew Back From European Getaway
Jennifer Lopez Wears Old Bracelet From Ben Affleck
Simone Biles Cheers on MyKayla Skinner
See the Royals Socialize at a 1991 Cocktail Party
Eugenie Posts Pics from Harry & Meghan's Home
Queen Trolled Tourists Who Didn't Recognize Her
Blake and Ryan Recreated Their First Date on IG