Just a little over a year after being robbed in Paris, Kim Kardashian was once again the victim of a burglary. TMZ reports that the reality star and her husband Kanye West had three of their cars broken into—though the person robbing them didn't get away with all that much. 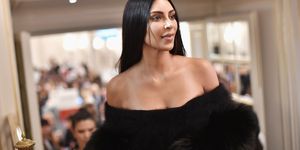 According to law enforcements (per TMZ), the suspect entered the couple's property and "trashed the cars in the driveway" around 4 a.m. PT on Friday. He was caught on camera, and appears to have only gotten an iPhone before being "chased" off the premises by security.

He also reportedly robbed a car on Kathy Griffin's neighboring property and stole a purse.