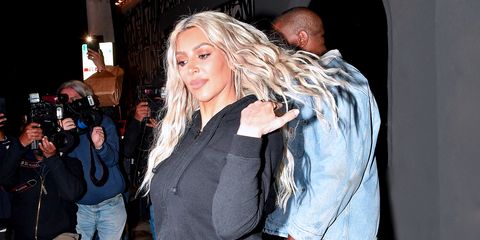 Kim Kardashian recently welcomed her third child, and the internet was quick to theorize that Kylie Jenner (who is reportedly pregnant) was actually her surrogate—especially since there were incorrect rumors that Kylie was giving birth at around the same time Kim's daughter was born.

Weird that @KylieJenner was apparently in hospital this weekend and Kim’s Baby was born yesterday 🤷🏼‍♀️🤷🏼‍♀️🤷🏼‍♀️ IS KYLIE THE SURROGATE? Yes or No??? pic.twitter.com/VNYr2GguJ8

Definitely a "hmm, what is the truth?" moment, but Kim shut down the theory without directly addressing it in a blog post, saying she and Kanye decided to use a "gestational carrier"—AKA someone who has no relationship to either of them.

"After exploring many options, Kanye and I decided to use a gestational carrier," Kim said. "A traditional surrogate donates her egg, is artificially inseminated with the father's sperm and then carries the baby to term. Since we implanted my fertilized egg in our gestational carrier, our baby is biologically mine and Kanye's."

Kim also added that she found their surrogate through an agency, which was "so helpful and made me feel at ease about the whole process. They ran a thorough background check, considered our gestational carrier’s medical history, and made sure that she and our family felt as comfortable as possible."

Related Story
Kylie and Kris Jenner's Baby Gifts to Kim
Mehera Bonner Contributor Mehera Bonner is a news writer who focuses on celebrities and royals.
This content is created and maintained by a third party, and imported onto this page to help users provide their email addresses. You may be able to find more information about this and similar content at piano.io
Advertisement - Continue Reading Below
More From Celebrity
Diana Had a Secret Message on Her Wedding Shoes
Will's Friends Made "Jibes" About Kate's Mom
Advertisement - Continue Reading Below
William Will Suffer "Worst" from Harry's Memoir
Simone's Boyfriend Sent Her the Sweetest Message
Harry's Friends Don't Want to Be in His Memoir
Will & Kate's Modern Approach to Raising George
Meet Simone Biles's Super Supportive Parents
What Happens on Katie's Season?
Bennifer Recreated Their 2002 PDA Moment
Why Harry's Memoir Release Date Has Upset People