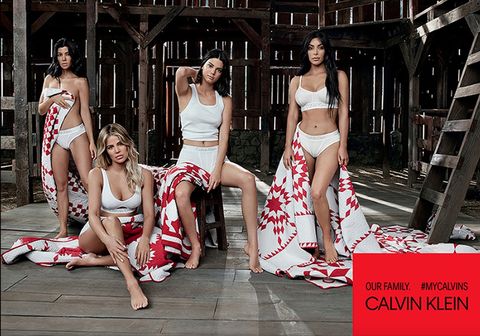 Since debuting on Monday [22 January], Calvin Klein's "My Family" campaign has been all Keeping Up With The Kardashians fans have talked about.

There are so many things to dissect here. First, Kylie's lack of potential pregnancy bump took center stage. Then, the fact her lips looked suspiciously smaller in the photoshoot. And now? People are genuinely speculating about whether her sister Kim Kardashian was replaced by an imposter for the shoot.

In one image from the campaign in particular, Kim is kneeling alongside her sisters in a black lingerie set, looking at the camera. And people think it doesn't look like her.

On closer inspection, she doesn't really look like herself, but that's obviously just a bit of filtering and post-production work. Right? RIGHT?

This looks like an IG model pretending to be Kim Kardashian pic.twitter.com/pYMYbetLwP

The kardashians have been killed and replaced with clones

Y'all so focused on Kylie you didn't even realize Kim aint even Kim pic.twitter.com/k7v2onxomB

The allegations come as fans are also calling out Calvin Klein for an alleged Photoshop fail, which seemingly shows Kylie Jenner with only one leg.

So many questions. SO MANY.