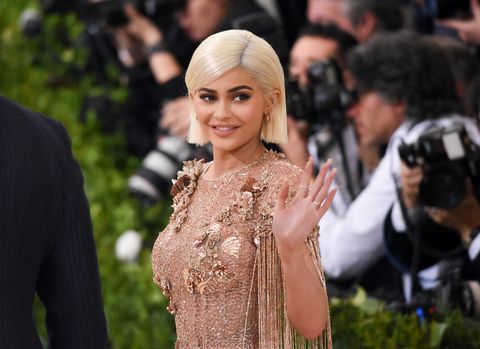 Earlier this week, something that had started to seem unthinkable happened: Kylie Jenner was spotted, out in public, for the first time since September. TMZ broke the news with photos and video of Kylie walking her presumably-pregnant self around Los Angeles' Hidden Hills neighborhood, alongside her BFF Jordyn Woods and mom Kris Jenner.

Kylie wasn't just hanging out anywhere in LA though. The Hidden Hills spot was actually a construction site, where Kylie is reportedly planning to build a new, absurdly lavish home. TMZ, always a wealth of Kardashian and Jenner knowledge, obtained the building permit for the lot and the planned house is HUGE.

The job described in the permit will cost more than $2.37 million and that's before Kylie starts decorating (which will obviously be costly in its own right).

According to Entertainment Tonight, Kylie plans to build a whole compound and live a much more private life going forward. The source says Kylie is "looking for a quieter life and wants to buy land to build a compound. Kylie wants to build a farm, garden, and have a horse stable. Even a pregnant Kylie is all business."

Kylie is reportedly due in February, and expecting a baby girl with her boyfriend Travis Scott.

Kayleigh Roberts Contributor Kayleigh Roberts is the weekend editor at Marie Claire, covering celebrity and entertainment news, from actual royals like Kate Middleton and Meghan Markle to Hollywood royalty, like Katie Holmes and Chrissy Teigen.
This content is created and maintained by a third party, and imported onto this page to help users provide their email addresses. You may be able to find more information about this and similar content at piano.io
Advertisement - Continue Reading Below
More From Celebrity
The Queen Displayed a Rare Photo of the Sussexes
Justin Backs Britney After Conservatorship Hearing
Advertisement - Continue Reading Below
Jen Aniston Said a Male 'Friends' Star Was Rude
Jennifer Aniston on "Silly" Love Life Speculation
People Are Devastated by Britney's Revelations
Britney Spears on "Abusive" Conservatorship
'Too Hot to Handle' S2 Was Filmed In Paradise
About That "Sexy Nerd" From 'Too Hot to Handle'
Prince Charles Is Leaving London When Harry Visits
What Happens on Katie's Season?