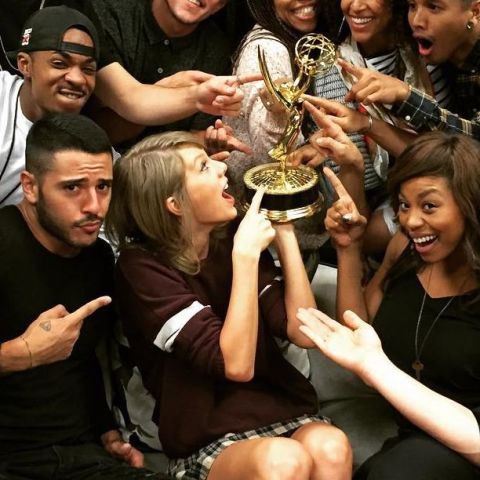 Even though she wins *everything* (a VMA victory and dethroning Kim Kardashian on social media are among her latest achievements), you'd never expect Taylor Swift to be the recipient of TV's top honor: an Emmy.

But then T. Swift went ahead and did the most T. Swift thing she could possibly do. She found a way to get herself halfway to EGOT glory and actually took the golden statuette home. Well, on the road rather.

While she officially won the award earlier this week (for Best Original Interactive Program Emmy for the "Blank Space" AMEX Unstaged: Taylor Swift Experience), the trophy has officially joined her on the 1989 World Tour. To say she's thrilled about the latest addition to her squad would be quite the understatement.

"WHEN THEY OVERNIGHT YOU AN EMMY," the singer wrote on Twitter. "I DID NOT KNOW THIS WAS A THING."

Well, it is indeed a thing—and for Swift (who starred in and served as executive producer for the project), her world is seemingly much more perfect because of it. Below, a series of incredibly gleeful Instagram posts documenting her happiness: