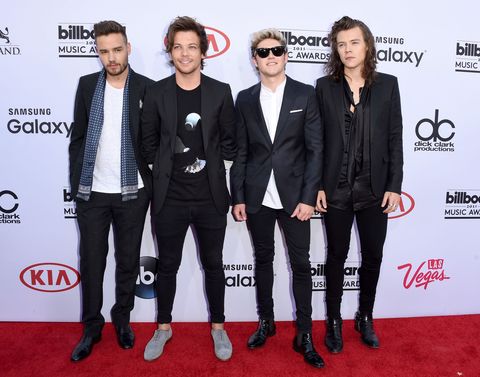 It's a love story we're all familiar with: This time three years ago, Taylor Swift and One Direction's Harry Styles dated. It didn't work out. Two years later, Taylor released 1989, an album where many of the songs were interpreted to be about that relationship. Harry and his band had no musical response…until now.

This morning, he and One Direction released "Perfect," a love song Styles wrote about a pretty public relationship. Lyrics include "And if you like cameras flashing every time we go out/Oh, yeah /And if you're looking for someone to write your breakup songs about/Baby, I'm perfect," which appears to be as thinly-veiled a shoutout to Tay as Taylor's "Style" was to well, Harry Styles. But there's nothing nasty about the single; it's very sweet...and revealing. Listen for the overlap between its and 1989's lyrics:

If only all of our exes would pay tribute to us so beautifully.

Alyssa Bailey News and Strategy Editor Alyssa Bailey is the news and strategy editor at ELLE.com, where she oversees coverage of celebrities and royals (particularly Meghan Markle and Kate Middleton).
Advertisement - Continue Reading Below
More From Celebrity
Inside Chrissy Teigen and John Legend’s Home
A Look at Royal Family Portraits Through the Years
Advertisement - Continue Reading Below
Are The Weeknd's 'After Hours' Lyrics About Bella?
Kendall and Harry Had a Moment At the Brit Awards
Dwyane Wade on Getting Zaya's Pronouns Right
Harry Styles' Diana-Inspired Brit Awards Outfits
Jenna Dewan and Steve Kazee Are Engaged
Kim Seemingly Tried to Kiss Kanye on a Kiss Cam
Ashley Graham Continues to Spread Body Positivity
'Bachelor' Victoria F. & Peter's Ex Had a Fight