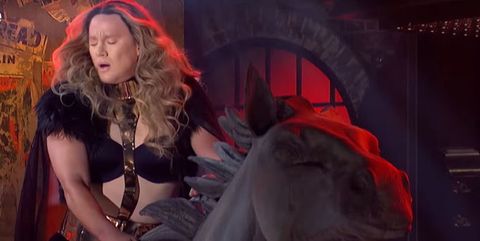 Update 1/7: Will this be the best Lip Sync Battle yet? WILL IT? It just might be—if Channing Tatum has anything to do with it. We didn't think it could get better than Channing Tatum dressing up as Queen Elsa, but we were wrong. Now, he's taking on Queen Bey in his version of "Run the World (Girls)", complete with black bustier.  A teaser of his performance was posted on Lip Sync Battle Executive Producer Casey Patterson's Twitter page. And we're dead. Watch tonight on Spike.

Update 1/6: If you thought Channing Tatum singing along to Frozen was a highlight, get ready. In the newest teaser, Jenna Dewan cops some of her hubby's moves and dances along to Ginuwine's "Pony" AKA the song Channing Tatum's character in Magic Mike had on lock. Catch the full episode Thursday night on Spike.

Update 1/4: Channing Tatum and Jenna Dewan-Tatum's episode of Lip Sync Battle airs Thursday night at 10 p.m. EST, but to hold you over, Spike just release a clip of Channing Tatum performing "Let It Go" in character as Frozen's Elsa. You're welcome.

Original story 12/21: The second season of Lip Sync Battle kicks off January 7 with an hour-long battle between none other than Channing Tatum and his wife, Jenna Dewan Tatum. Judging from the preview, it looks like the Tatumathon will feature Chan channeling Disney goddess Elsa, and Jenna parodying his getup from Magic Mike. Please, please tell me that means she's dancing to "Pony."

"I just hope my marriage isn't over after tonight," Chan joked. Looks pretty #relationshipgoals to me.