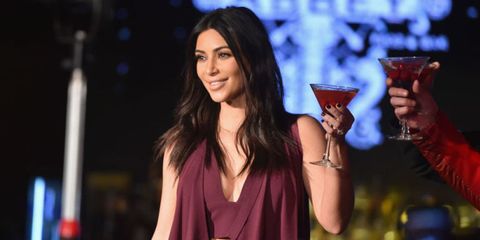 Kim Kardashian unknowingly (or perhaps knowingly) kicked off a great women's rights debate on Twitter when she called out Bette Midler, Chloë Grace Moretz, and Piers Morgan for the shade they threw after she posted a nude selfie Monday. Her tweets inspired some actresses—who were already posting about gender equality in honor of International Women's Rights Day—to ask why any women should be shamed for posting a nude selfie of her own body.

Modern Family actress Ariel Winter was quick to point out that men are not shamed for posting their nude shots:

No one was body shaming @justinbieber when he posted his nude guitar photo so why @KimKardashian? #herbodyherchoice #InternationalWomensDay

I think everyone, men and women, should have the right to choose what they do with their bodies-- and not be criticized.

@iwatchedbieber @justinbieber @KimKardashian I'm not singling him out, only trying to make a point. Never thought he did anything wrong.

Disney Channel star Rowan Blanchard added that at least Kim's images were posted with her consent—too many aren't of other women:

Girls being nude publicly isn't new:but isn't it nice when they can be the subject of the image, &the portrayer too? pic.twitter.com/7Ac07O8U6l

Anybody who tries to say how a woman chooses to display their OWN body is wrong, is severely misinformed and misguided.

If a guy posts a shirtless picture, people say how "steamy" and "hot" it is. But if a woman chooses to do that, it's setting a bad example?

Let me rephrase: it isn't fair to condone one person for expressing their beauty/body and condemn another for doing the same.

Emily Ratajkowski took offense at some outlets' speculation that Kanye West was tweeting from Kim's account during her "outburst":

Love when a man comments on a woman's decision to post a nude photo. Her body, her career. Sexist bullsh*t. @KimKardashian

Also love that when a woman stands up for herself everyone thinks it must be her dude speaking for her. @KimKardashian

(Claims to which Kim replied that no, it was all her:)

While Kim's friend Demi Lovato posted a simple image to break the issue down: