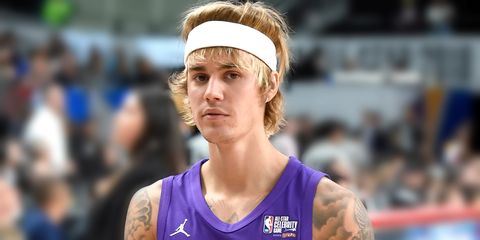 "If tattoo[s] didn’t hurt everyone would have them," he wrote. "Well maybe not very one!! Over a hundred hours of hart work on my body and I wouldn’t take back a single one.. I ABSOLUTELY LOVE ART AND IVE made my body a canvas and it’s SO MUCH FUN."

His body is definitely a canvas. As E! News reports, Bieber has been working on his ever-growing collection of body art since 2012.

If tattooed didn’t hurt everyone would have them. Well maybe not very one!!Over a hundred hours of art work on my body and I wouldn’t take back a single one.. I ABSOLUTELY LOVE ART AND IVE MAde my body a canvas and it’s SO MUCH FUN

Much of the torso art was added by tattoo artist Bang Bang in 2017. "We added two angels, one on each side," the artist told E! News. "Whenever I do an epic piece, there needs to be the positive and negative. There needs to be a balance...visually there needs to be contrast. Below each of the angels, there is a demon that needs to be defeated. The skeleton on one side and the serpent on the other."