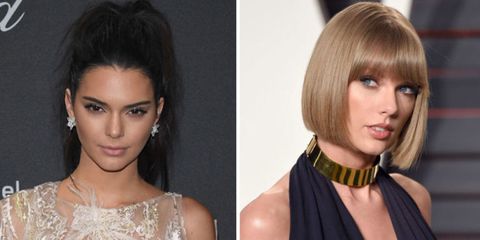 Update 7/20: Kendall Jenner just posted an Instagram that may or may not address the shade that was thrown on Twitter yesterday. See for yourself:

Original story, 7/19: There's no bond stronger than that of the Kardashian/Jenner sisters, so when Kim Kardashian West went in on Taylor Swift, the whole Kardashiclan had her back. Khloé Kardashian battled it out with Chloë Grace Moretz, Kylie Jenner may or may not have shaded Tay with a lip kit, and Kendall Jenner got in a few sassy likes.

It seems like Kendall is taking a side in all of this. She liked the "do you follow me on snap chat" tweet, which was Kim's gentle way of saying "I'm going to roast Taylor Swift in about 2.5," along with Hailey Baldwin's clapping emojis, which were tweeted only two hours after the takedown, so many think she was clapping for Kim.

Even though Kenny and Tay both off-and-on dated Harry Styles, we figured they were on good terms, considering the two share the same besties (Gigi Hadid and Cara Delevingne), and Taylor invited her on stage at her 1989 tour.

Advertisement - Continue Reading Below
More From Celebrity
A Look at Royal Family Portraits Through the Years
Are The Weeknd's 'After Hours' Lyrics About Bella?
Advertisement - Continue Reading Below
Kendall and Harry Had a Moment At the Brit Awards
Dwyane Wade on Getting Zaya's Pronouns Right
Harry Styles' Diana-Inspired Brit Awards Outfits
Jenna Dewan and Steve Kazee Are Engaged
Kim Seemingly Tried to Kiss Kanye on a Kiss Cam
Ashley Graham Continues to Spread Body Positivity
'Bachelor' Victoria F. & Peter's Ex Had a Fight
Watch Meghan Attend the Ballet with a Puppet