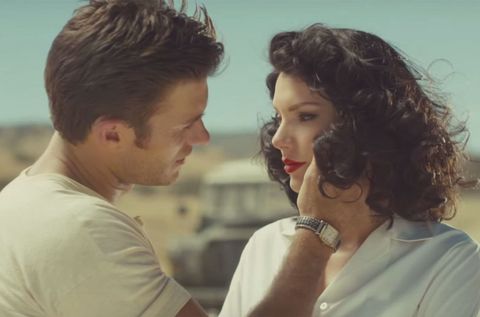 Scott Eastwood was downright dashing in Taylor Swift's "Wildest Dreams" video, but if he'd listened to his agents, he never would have been in it.

Eastwood, who is currently starring as Lieutenant GQ Edwards in Warner Bros.'s super villain blockbuster Suicide Squad, recently admitted to People that his team wasn't thrilled with the idea of him costarring in the video.

"None of my agents wanted me to do it, actually," Eastwood said. "They said, 'Oh, we don't want you to do that! Why would you be Taylor Swift's boy toy?' And I said, 'Why the hell not?'"

Obviously Eastwood made the right call, because the dreamy video was a huge success and, apparently, an absolute blast to film.

Shortly after he wrapped on the shoot, Eastwood Instagrammed a picture of him and Swift on set, along with the sweetest caption.

"What an amazing time working with @taylorswift," he wrote. "Not only is she a rock star. But someone I am proud to call a friend. She is a great person and those are hard to find in your life. When you do…hold tight."

What an amazing time working with @taylorswift Not only is she a rockstar. But someone I am proud to call a friend. She is a great person and those are hard to find in your life. When you do.... Hold tight. #WildestDreamsMusicVideo

We're glad Eastwood stood up to his agents on this one because we can't imagine the video without him—not even in our wildest dreams.