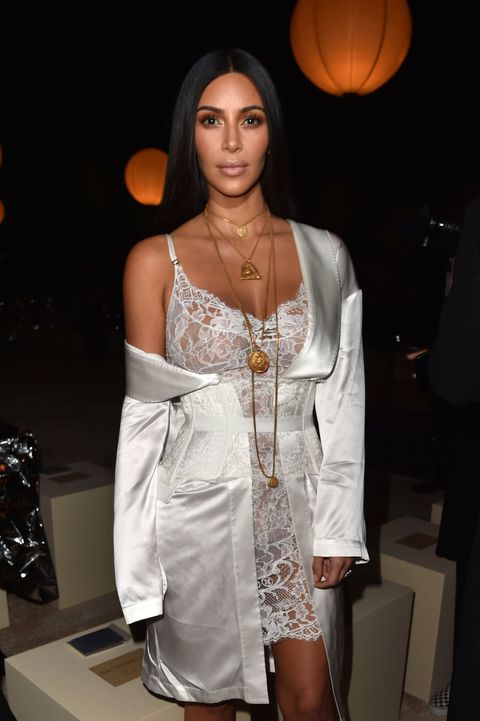 Terrifying new details now explain how Kim Kardashian was able to escape her Paris hotel room to call for help on Sunday night.

As previously reported, the reality star was held at gunpoint by multiple armed men dressed as police officers while staying at l'Hotel de Pourtalès. The men then "bound and gagged" her before locking her in the bathroom and stealing over $10 million of her jewelry.

"[Kim] was tied up, and gagged with duct tape wrapped around her head," a source close to the star revealed to People. "They put plastic ties around her wrists but she managed to squeeze her hands out of the wrist ties by wriggling her hands."

"She was hysterical but not screaming as she knew she had to keep quiet to survive," the source continued.

Another source then explained that, once free, Kim ran to the apartment's balcony and screamed for help. She was heard by her friend and former stylist Simone Harouche, who had reportedly locked herself in a downstairs bathroom after hearing all the commotion. E! News reports that Kim still had duct tape on her legs when she ran to meet her.

Luckily, Simone had already texted Kim's bodyguard at the time, and he quickly rushed back to the hotel to meet with them. Police arrived shortly after, and both women were able to provide statements about the attack.

This content is created and maintained by a third party, and imported onto this page to help users provide their email addresses. You may be able to find more information about this and similar content at piano.io
Advertisement - Continue Reading Below
More From Celebrity
The Kardashians' Most Body-Confident Nude Shoots
What Happens on Katie's Season?
Advertisement - Continue Reading Below
Britney Spears Says She Was Locked in a Bathroom
Kate and William Holiday In Cornwall
Blake Lively Wears a Pink Sequin Dress
Meghan Markle Hangs Out With Melissa McCarthy
Simone's Boyfriend Sent Her the Sweetest Message
Rebel Wilson Recreated This Britney Spears Look
Jennifer Lopez Flew Back From European Getaway
Jennifer Lopez Wears Old Bracelet From Ben Affleck