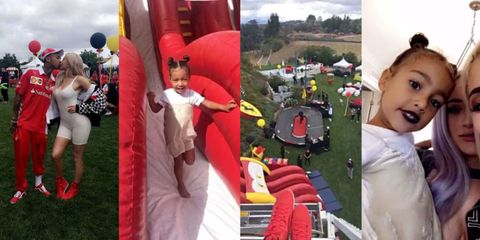 Kardashian birthday parties have always been decked-out extravaganzas, but their latest—the one Tyga (now Kylie Jenner's boyfriend) threw for his and Blac Chyna's (now Rob Kardashian's pregnant fiancée) four-year-old son, King Cairo—was this year's craziest, hands down. The party was Ferrari-themed, with horse rides, a giant inflatable slide, a trampoline, and a ferris wheel among the attractions. Kylie Snapchatted herself, Kendall, and the rest of the crew enjoying all of it (Kim Kardashian was absent, for understandable reasons):

She also gave a good look at the decor and goodie bags, which were also insane:

It was a particularly big day for North West, who lived her best life riding the slide and requesting cake first. Then she did something Kim Kardashian may or may not be a fan of: she tried her very first Kylie Lip Kit.

North chose the black one because she has no fear of a statement lip:

She wore it very well:

Kylie and Tyga also used the party to show just how in love they are, were there any doubts: