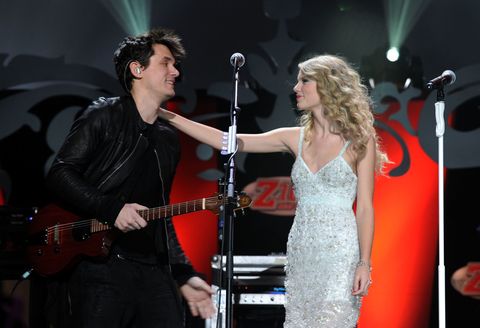 Many years ago, John Mayer dated a 19-year-old Taylor Swift. They broke up about three months later, and Swift wrote a song about him, as she often does with her exes. "Dear John" humiliated him, Mayer told Rolling Stonetwo years post-breakup. "I didn't deserve it. I'm pretty good at taking accountability now, and I never did anything to deserve that. It was a really lousy thing for her to do."

It has been four years since that interview, but Mayer is still a little resentful, it appears. He reportedly tweeted and then deleted this message on Swift's 27th birthday yesterday.

Alyssa Bailey News and Strategy Editor Alyssa Bailey is the news and strategy editor at ELLE.com, where she oversees coverage of celebrities and royals (particularly Meghan Markle and Kate Middleton).
Advertisement - Continue Reading Below
More From Celebrity
Kate and Meghan Are Glowing In Massimo Dutti
The Jonas Brothers Remade a Scene from 'Camp Rock'
Advertisement - Continue Reading Below
Harry Doesn't Want 'The Crown' to Cover His Life
Meghan's Emotional Visit to a London Dog Shelter
Taylor Swift's Mom, Andrea, Has a Brain Tumor
Kate Wore a Great Chevron Blouse to UK Event
Brad Pitt and Jennifer Aniston's Pics, Analyzed
58 Celebrities Who Hated Their Roles
Prince Harry Grins as He Returns to Canada
Meghan Markle Went on a Hike With Archie