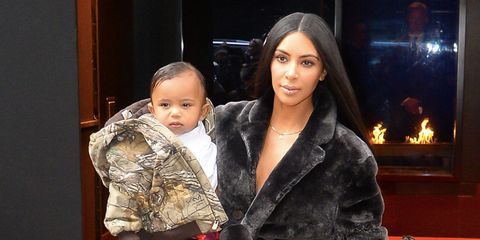 The mom police has arrived, and this time they're ticketing one Mrs. Kim Kardashian West.

Over on Facebook, Kim posted a cute photo of her son Saint in his car seat. It's adorable and the entire world said "awww" and then moved on. JK! This is the internet, silly!

After Kim posted a photo, a slew of Super Moms Who Know Best immediately came for Kim about Saint's forward-facing car seat.

"[H]e is so cute let's protect this handsome boy by making sure is rear facing," one commenter wrote. "He should really still be rear facing," wrote another. And so on, and so forth.

Then, the people came to defend their queen, and ask for an end to mom-shaming.

"I have an almost 3 year old that has been front facing since she was big enough to be," one commenter wrote. She continued: "[H]owever I just read that even until age 4 it is safest to stay rear facing, and that I can even chose to turn my seat back around. As mothers, we should really support each other and not criticize every single thing another mom does - no matter who she is. Front facing or rear facing, at least she got the safety clips right this time! Let's show some support and give a little credit where credit is due. Every mom does things differently. Doesn't make it right or wrong."

And then, finally, the third wave of commenters — the ones who brought their popcorn to enjoy the show. "I literally only looked at the comments to see who was going to complain about his car seat 😂," wrote one commenter.

As Good Housekeeping points out, car seat laws vary from state to state, and if we're to assume Saint is in California, which is most likely, a new California state law mandates children under the age of two must be property secured in a rear-facing child restraint system, unless the child weights 40 pounds or more or is above 40 inches tall.

But the magazine is quick to point out that Saint is 18 months old, and could be at the top height and/or weight limit allowed by by the car seat manufacturer, which means that Kim would have to switch him to a forward-facing car seat.

Ack! This is complicated! I'm tying my tubes as I type! (Yes, it's difficult, but I believe in me!)

Perhaps since nobody knows Kim's life, and besides, all evidence points to her being a very competent mom, we should all just mind our own beeswax. Next time, maybe everyone could stick to comments about how freaking cute Saint is. Because he is very cute! That face! Those curls! And is that a Bob the Builder sippy mug!? Kid's got taste.

Laura Beck Laura Beck is a Los Angeles-based TV writer and frequent contributor to Cosmopolitan.com — her work has appeared in the New York Times, New Yorker, Jezebel, and the Village Voice.
Advertisement - Continue Reading Below
More From Celebrity
Khloé Kardashian Is Being Trolled Over Febreze
A 'Friends' Reunion Special Is Coming to HBO Max
Advertisement - Continue Reading Below
Katie Holmes Is in Head-to-Toe Chloé at Their Show
Ariel Winter Now Has Strawberry Blonde Hair
46 Stars Who Dated Before They Were Famous
Every Easter Egg in Taylor Swift's 'The Man' Video
Kate Middleton Does Some Sports in $38 Sneakers
Sarah Hyland Defends Ariel Winter’s Dress on Insta
Prince Harry Wants to Go by Just "Harry" Now
Ashley Graham Talked Breast Pumping in an Uber