Kylie Jenner is reportedly expecting her first child with current boyfriend Travis Scott, multiple sources are confirming to TMZ. The 20-year-old started telling friends earlier this month, the outlet reports, and Scott has told friends they're having a girl, though TMZ hasn't verified that itself. 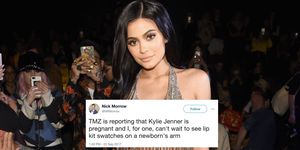 The star just posted this photo on her Snapchat:

According to People, Jenner is due in February, with one source saying that "the family has known for quite some time." Another source said the "unexpected but completely amazing turn of events" has made Kylie "the happiest she's ever been."

Page Six also reports that the couple, who have been dating since April, are indeed expecting a girl, with one source claiming that Kylie has been "looking pregnant for about four months." The publication adds that the Kardashians will be confirming the news later on Friday.

The timing of the announcement (if you can call a sudden swirl of unnamed sources an "announcement") does make sense, considering season 14 of Keeping Up with the Kardashians is set to premiere in a little over a week. But without official confirmation from Kylie herself, this is all just conjecture...stay tuned for updates.

Alyssa Bailey News and Strategy Editor Alyssa Bailey is the news and strategy editor at ELLE.com, where she oversees coverage of celebrities and royals (particularly Meghan Markle and Kate Middleton).
This content is created and maintained by a third party, and imported onto this page to help users provide their email addresses. You may be able to find more information about this and similar content at piano.io
Advertisement - Continue Reading Below
More From Celebrity
Blake Lively Called Out an Instagram Account
Khloé and Tristan Have "No Label" Right Now
Advertisement - Continue Reading Below
Kate and Will Share Intimate Moments in New Photos
Scott Disick Avoids Travis Barker, Apparently
Adele's Latest Date Look Was a Leather Suit
Alicia Silverstone Got Banned From a Dating App
The Queen Just "Reluctantly" Canceled a Trip
Adele's Album Will Feature a Sensitive Voicemail
Selena Gomez Just Debuted a Sleek Bob
Zendaya Looked Incredible at the 'Dune' Premiere