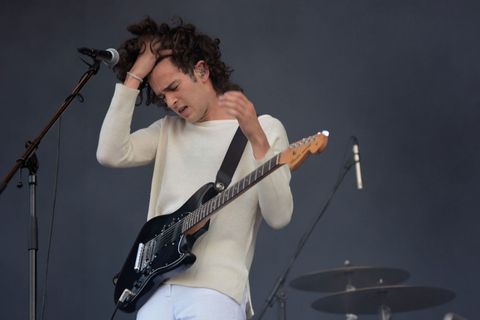 What was that? Oh just the sound of your heavy heart lifting, nay, singing. According to US Weekly, we no longer have to hold ourselves responsible for Taylor Swift's single status because the singer's no longer single! Tay is reportedly dating Matt Healy, the 25-year-old guitarist and lead singer of The 1975. He certainly fits her type: Brit (see: Harry Styles), musician (see: John Mayer), hot (see: everyone she's ever dated). Dare we say he even has that James Dean daydream look in his eye, not to mention the whole long hair, slicked back, white T-shirt thing going on. And she recently attended The 1975's concert in New York last week with friend—not to be confused with girlfriend—Karlie Kloss. Proof! (Proof?)

We talked to Healy back in August about The 1975's rising stardom. See below for his unexpected guilty pleasure, his thoughts on being a teen idol, and what song he and Taylor Swift probably make out to. Plus, read the full interview here.

What did your parents want you to do when you were growing up?
They let me do whatever I wanted to do, but music was all I was interested in. My parents kind of became celebrities when I was older, but for the majority of me growing up, they were two actors that were jobbing around. So the idea of me doing what I wanted to do was not only financially endorsed but also emotionally endorsed. I think that's the problem with a lot of environments—you don't always have that.

So, what's it like being a teen idol?
This is the thing: There's a lot of fainting, pulling out of the crowd, and crying. I'm really figuring it out, man. If I invested in it and sat there, and thought about the fact that a year ago I couldn't get 50 people to come and see us in Manchester, and now were doing 4.5K people in Columbus, Ohio, it's, like, fucking bananas. We could have a proper conversation about all the weird things that it brings up, you know, how it messes with your ego and genuine sense of self.

Favorite song to make out to?
"Only You" by Yazoo. I love it. It's the most important song alive.

First thing on your mind when you wake up?
Smoke.

Finish this sentence: I cant go to bed unless I've...?
Smoked.

What's your guilty pleasure?
'Wide Open Spaces' by Dixie Chicks. That whole record. I love it. I know every single word.

What's your best and worst personality trait?
I'm an egomaniac and a narcissist. That's two in one.