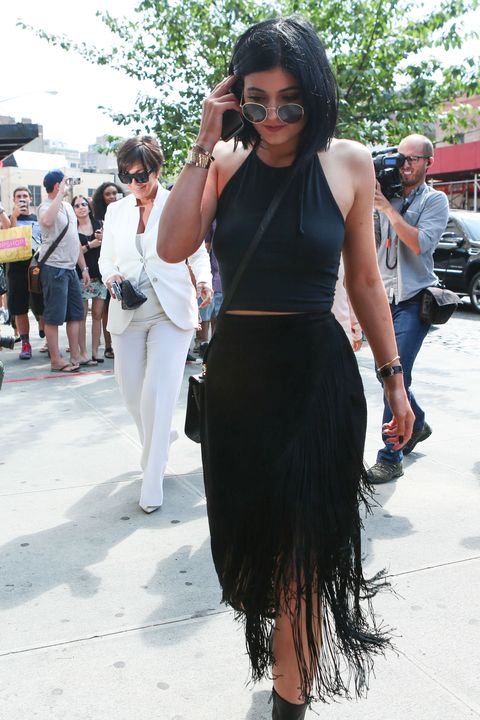 In an interview with InStyle UK, thriving-on-tough-love teen Kylie Jenner reveals she's been footing her own bills since her momager severed the financial cord at 14. So that explains the "lip liner" budget.

"My mum cut me off financially three years ago so I pay for everything," she told the mag (although we're 98.9 percent sure she didn't say "mum"). "My car, my gas and food as well as my clothes. There are so many outfits I bought in the past that I just think now are NOT cute—but there's not very much I can do about it!"

Oooooh. Did a certain rumored relationship prompt the separation? Is Kendall on her own too? But Kris brokers all her daughters' business deals anyway, so it's not like poor 17-year-old Kylie's really left to fend for herself, right? Whatever the case may be, she must be doing pretty well judging by her massive, home-theater-boasting house.

Chelsea Peng I'm Chelsea Peng, the assistant editor at MarieClaire.com.
Advertisement - Continue Reading Below
More From Celebrity
Sophie Turner Stuns In a Gothic Look
Ariana Grande Is a Disney Princess at the Grammys
Advertisement - Continue Reading Below
Priyanka and Nick Went All Out for the Grammys
Lizzo Is a Vision in White at the Grammys
Why Taylor Swift Is a No-Show at the Grammys
Is Lana Del Rey Dating a Hot Cop?
The World Mourns NBA Legend Kobe Bryant
Who is Maggie Rogers, the Grammy-Nominated Artist?
Alicia Keys' Biggest Fan Is Swizz Beats
Sel on Healing After Justin Emotionally Abused Her