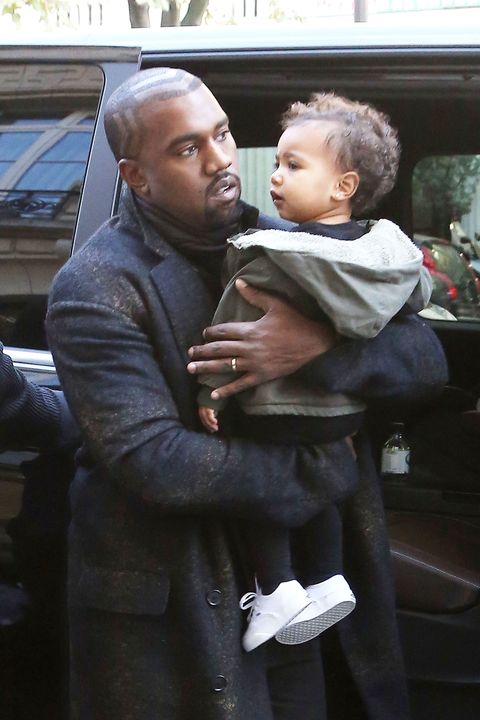 Update, 6/16: Here lies Kanye West, Dad. During North's birthday blowout Monday, a fellow Disneyland guest caught him slumped down in his seat sleeping the deep, open-mouthed sleep of a man who bears the weight of artistry, fashion, truth, goodness, music, art, and immeasurable fame on his velour-ed shoulders. Of what does he dream? Sick rhymes? Modern architecture? Escape? Whatever it is, it has to be more interesting than the tomfoolery going on onstage.

Original post, 6/15: Jet-setting infant North West flew first-class to Armenia, but not even Shirley Temples served in real glassware and printed menus could prevent her from succumbing to a condition that affects babies of all tax brackets: exhaustion.

In a burst of family-vacation Instas posted Monday, Kim Kardashian can be seen cradling a zonked-out Nori during her christening at St. James Cathedral in Jerusalem, to which Kimye and company traveled after a stay in the mother country. Is anyone else getting a whiff of Small Cowper Madonna? WHAT IF KANYE ORCHESTRATED THE WHOLE THING?! TBH, I wouldn't put it past him—he does know Le Corbusier, after all—and there are worse things to evoke than Raphael.

Chelsea Peng I'm Chelsea Peng, the assistant editor at MarieClaire.com.
This content is created and maintained by a third party, and imported onto this page to help users provide their email addresses. You may be able to find more information about this and similar content at piano.io
Advertisement - Continue Reading Below
More From Celebrity
Princess Eugenie's Prince Philip Tribute
Serena Williams Signed a Major TV Deal With Amazon
Advertisement - Continue Reading Below
Chrissy Wrote Luna the Sweetest Birthday Message
Prince Harry Has Met Princess Eugenie's Son August
The Queen Returns to Work After Philip's Death
A Brief History Lesson on Brad and Jen
Rihanna and A$AP Were Spotted on a Date
Prince Harry Is "Really Missing" Meghan Markle
J.Lo and A-Rod Are "Completely Back On"
Chrissy Shared the Cutest Photo of Luna and Miles