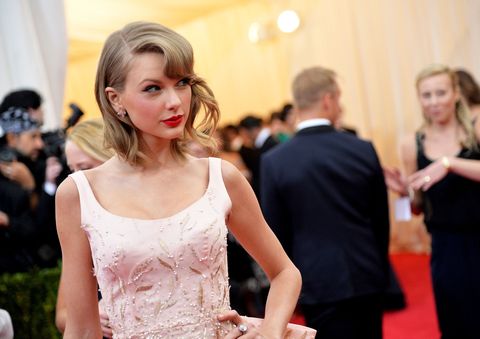 The "announcement" was actually a tweet and picture of Swift holding up a sign that said, "baby's first concert"—a request from a fan and DJ to announce that he and his wife are expecting a child. As for the "choice in words in labeling"? Readers and GossipCop.com believe she's referencing to the times in the article when Swift was referred to as "Calvin Harris' rumored girlfriend" and "Harry Styles ex-girlfriend."

Hasn't anyone learned by now? She's Taylor Swift, y'all. And she's not to be messed with. (BTW, still waiting for our invitation to join your squad, Tay.)

Samantha Leal Senior Web Editor I'm Sam, the senior editor at MarieClaire.com.
This content is created and maintained by a third party, and imported onto this page to help users provide their email addresses. You may be able to find more information about this and similar content at piano.io
Advertisement - Continue Reading Below
More From Celebrity
Matt Damon Trolled Ben Affleck and Jennifer Lopez
This Old Video of the Queen Saying "Nah" Is LOL
Advertisement - Continue Reading Below
Diana Had a Secret Message on Her Wedding Shoes
Will's Friends Made "Jibes" About Kate's Mom
William Will Suffer "Worst" from Harry's Memoir
Simone's Boyfriend Sent Her the Sweetest Message
Harry's Friends Don't Want to Be in His Memoir
Will & Kate's Modern Approach to Raising George
Meet Simone Biles's Super Supportive Parents
What Happens on Katie's Season?